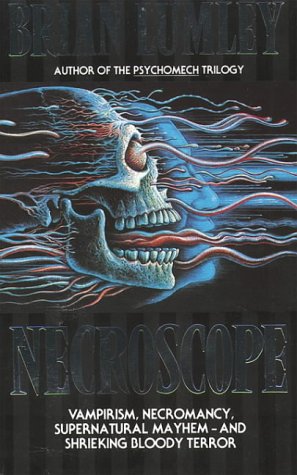 These damn Lumley books have been haunting me for years. When I was a little one, there was this amazing bookstore by my dad's work that I went to almost everyday. The owner, Bob, was a sweet old man with a skill for origami and an obsession with Sherlock Holmes. He also had the best selection of horror paperbacks in the city. I had my first taste of horror fiction from his store and I'll never forget it. He had these Necroscope books which teased me with their length and their seeming serial nature. I've picked up the first book so many times with the intent on reading the series, but never got around to them. Years go by, books are lost, sold, loaned and never returned. However, about three years ago, I decided to begin collecting the series without going to any strenuous lengths, which is to say that if I found them on my travels, if I stumbled across them, I would pick them up. I kept finding the first three books (I've purchased three copies of the first one, waiting all the while to get one in near mint condition), but never the latter parts of the series. I didn't want to start the series until I had my hands on all of them. This week, at a booksale, I picked up the remaining five of them, thus completing the set. I had no excuse not to start this series.

Now that I've read the first book, I can safely say that I'm glad I waited so long. If I had tried reading this in my preteens or even my teens, I would have abandoned this without a second thought. Lumley's novel is slow and demands patience as he builds his world, detail by detail. The novel doesn't even introduce an actual vampire until the first third is over. Instead, the novel is preoccupied with the Cold War and espionage. As a kid, this would have bored me, even with the addition of an ESP branch to the various intelligence communities. Certainly, Lumley's pace isn't helped by the long introduction of his avatar, Harry Keogh. The reader must force themselves through a tedious section in which various teachers of Harry come to learn of his prodigious talent for mathematics. Scintillating stuff, indeed.

However, if the patient reader makes it through this lengthy setup, they're rewarded with some of the most batshit insane horror the 80s had to offer. I knew this had vampires, I knew it had people talking to the dead. I did not know, going into this, the details, and it's the details that make Lumley stand out. His vampires are not the traditional Dracula or the more sympathetic vampires of the 90s. Rather, his vampires exist in a category unto themselves. Instead of imagining the vampires as an aberration of humanity, a different race, Lumley posits that vampires are actually a sexless parasitical species that evolves contemporaneously with homo sapiens, which burrows its way into the human host and transforms them into a powerful superhuman capable of a practically immortal lifespan and tremendous powers, including hypnotism and strength. The vampire organism inside the host is also capable of protruding gloriously Cronenbergian tentacles that can, for example, produce eyes at will. It's gleefully mad.

Even if Necroscope only featured this ludicrously gory vampires, I would have been happy, but Lumley is not satisfied with this. His ambitions are greater. The lengthy section on mathematics and talking to dead people are not simple characterization. Instead, it is careful setup for some ridiculous time travel shenanigans that caught me by surprise. The ESP and espionage angle ends up being the most tame of all Lumley's narrative elements.
Necroscope is good pulpy fun, one that hides a confident and tricky storyteller. Lumley lures the reader with lurid cover art, promising vampires and gore, which he provides amply, but he packages all this insanity with some strong narrative work. He uses a frame device, a ghost briefing a British ESP intelligence agent, to command dual narratives, contrasting the upperclass schoolboy Harry Keogh with the ambitious and treacherous Boris Dragosani, necromancer for the USSR. It's worth remembering the conditions of production for Necroscope.

During Lumley's writing of the novel (probably), the USSR was in a period known as "stagnation." Led by Brezhnev and Andropov (both of whom appear in Necroscope), this period was characterized by negative economic, social, and political effects. It is no stretch to believe the USSR's more devious intelligence organizations were getting desperate in their bid to stay ahead of the Western powers that be. Political history worked against Lumley in this regard. By the time Necroscope was published in 1986, Gorbachev had already instated a new era. This was the same year that the USSR entered into a period of openness and transparency they dubbed "glasnost." The mid 80s also saw the attempt at reformation in the Communist Party, a movement called "perestroika," literally meaning restructuring. The rapid pace of politics in the 1980s pushes Necroscope into the realm of historical fiction almost immediately. The brazen attempt at topicality backfires completely, especially in his characterization of the primary antagonists.

Other novelists, especially working in our grimdark era, might have opted for a more nuanced or morally ambiguous examination of the hero and the villain. Lumley does not. Like the good Conservative that he is, Lumley depicts Dragosani in the most villainous ways possible: rape, betrayal, coldblooded murder, bodyhorror, mutilation, and other various horrific violations of human rights all come into play with Dragosani during his naked grasp for power. It's almost embarrassing the contrast between Dragosani and Harry. Where one is timid with and openly contemptuous of women, the other is a sex god, fucking the sole female character into bliss at every turn. Even their powers manifest in ideological ways: the Soviet must violate a corpse and steal the person's secrets while the good Brit has cosy chats with the vast hordes of ghosts. Harry seeks a world of knowledge in his preparations for their confrontation while Dragosani becomes increasingly corrupted, both physically and mentally. The only loyalties Harry seem to express are to his mother, who clearly represents the loving intelligent State while Dragosani seems only loyal to himself, a vile monster with no sense of honour (and perverted sexual proclivities to boot). This is plain and simple Cold War era reductionism; in other words, propaganda at its best.


Brian Aldiss coined the phrase "cosy catastrophe" to describe John Wyndham's novels that reinscribe the pervading middle class values of his society after whatever apocalypse befalls Britain. It's a term of derision to dismiss an oeuvre that is probably fairly not radical enough, radical either in form, content, or imagination. Cosy catastrophe could well be appropriate for Lumley's first Necroscope novel as nothing of great importance is changed by the climax, save for the deaths of dozens of Soviet soldiers. The narrative of Necroscope doesn't really change much of anything in terms of worldbuilding, but the novel does reinscribe the Conservative values that seem to ooze from its pages. The Cold War is returned to its cold status with a blow struck against the USSR and British intelligence continues its campaign against the Soviets. At no point in the novel does the politics of the USSR come up in any meaningful way. What little references we are treated to come from snide asides from "knowing" Soviets about the corruption at the oligarch level. Instead, Lumley is happy to paint the USSR as irredeemably evil, deserving only complete destruction in the face of the irrefutably civilized United Kingdom. It's worth repeating that Harry's schooling, both formal and informal, involve higher end mathematics and structured education. Lumley uses words like "logic" and "rational" when speaking of Harry and his education while these same attitudes are rarely brought up in regards to Dragonsani.

As with other Conservative works I've had the pleasure of reading, Lumley expresses an intolerance for queer folk and women. Throughout the novel, characters use the insinuation of queerness as an insult. Not being a sexual dynamo is evidence enough for the suspicion of being either a woman (the worst thing ever) or a faggot (the second worst thing ever). Repeatedly, when a character expresses a negative emotion (ie tears), they are rebuked for being like a woman. It grates on the nerves. Necroscope's world is one of men with agency. Women are either sexual receptacles or dead women in need of vengeance. I can recall only five female characters with dialogue, and four of those are horny wenches in need of sexing by the big strong men.
I'm certainly happy enough with the novel, despite its massive flaws vis-a-vis politics, both actual and gender, so I'll no doubt continue on!

Administrivia:
I read but one book in April, so there will not be an "April Reads" post. However, I did watch 46 feature films. You can see my rankings of those 46 features here. I did start the second book of this series, along with starting *deep breath* Infinite Jest (DFW), Deadhouse Gates (Steven Erikson), The Urth of the New Sun (Gene Wolfe), Ghost Story, and Floating Dragon (both by Peter Straub)! I can't even guarantee that I'll finish any of them. I'm kind of over giving myself shit for not reading a billion books in a year. There's no point in feeling guilty about it, especially as the guilt stems from the idea that books are more "worthy" of my time than say film, which is unfair. I watch a lot of trash cinema, but I'm also exercising my brain and writing copiously about those films. Frankly, I'm reading trash literature anyway.
Posted by matthew.

it's very amazing! Thanks for it. koni penetrasyon deneyi (CPT)

I'm not surprised to hear that the book contains a load of out-dated and offensive attitudes. I remember reading it as a teen and thinking it old-fashioned enough that I raised an eye-brow when it was turned into a setting for a tabletop RPG.

Intrigued by the stuff about British intelligence battling the USSR. Can't remember if the Americans feature in the books at all.

I also remember the books getting progressively weirder and more gruey until it reached the point where there was a planet full of vampires who were riding around on dinosaur-type things made out of stitched together corpses.

Dinosaurs made out of corpses is just the type of lunacy I want. If you wrote that to dissuade me, you failed spectacularly; I'm pumped to find out about this weirdness.

I think you're a little harsh on the author re:homophobia. Granted some of his characters are homophobic, but that doesn't mean the author is. Lumley said once that he has no issue with gays (I've quoted his words here):

'Actually, I did once write a story about a gay. He wasn't Wamphyri, no, but he was unpleasant enough in his way. The story is called The Man Who Photographed Beardsley, and it may seem pretty obscure if you're not familiar with the work of Aubrey Beardsley, an artist pal of Oscar Wilde in the days when homosexuality wasn't permitted, let alone socially acceptable. And I believe I've also portrayed a couple of characters in various novels as gay villains; in Khai of Ancient Khem and also in Mad Moon of Dreams.

Does this mean I have something against gays? Hell, no! By far the vast majority of my monsters are straights… twisted, but straight. Me, I don't care where you sling your tackle, as long as it's not in my direction… '