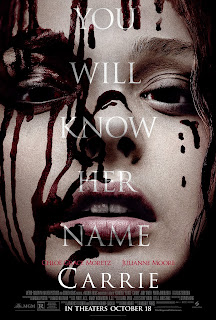 Part of my project to watch 52 films directed by women in a year, I chose the remake of Carrie thinking that it wouldn't be good but at least entertaining. Kimberly Peirce, director of Boys Don't Cry (which I've never seen), had the "audacity" to craft a remake of the "classic" De Palma version and critics took the film to task for not doing anything new or for existing in the first place. I admit my expectations were low, but I was really surprised by Peirce's Carrie and how much I liked it.

While it doesn't do anything particularly new, other than updating the circumstances to the modern day (cellphone videos etc), Carrie feels like a course correction, away from the more problematic exploitative elements of the De Palma version. The famous opening is replicated: Carrie has her first period in the shower and the girls throw tampons at her. Unlike the De Palma version, the camera never really leers at any of the girls nor is there any nudity. Instead, Peirce eliminates any sexual element entirely, leaving the scene uncomfortably disturbing: Carrie is covered by a bloody towel, reaching out with bloodied hands (perhaps the most heavy period ever), on the floor, sobbing with panic and pain.

Similarly, the famous moment during the prom, when Carrie finally unleashes her power, is not played for catharsis but rather disturbs the viewer. At first, it's satisfying for Carrie to reveal herself, for Carrie to proudly come out, if you will, as powerful, but this turns around quite quickly as the deaths of her classmates aren't really gratifying—mostly it's unnerving, as death should be. There is a pair of twins, held down on the floor by Carrie's power, who are crushed by the heels of panicked fleeing teens. Rather than suggesting their fate, Peirce keeps cutting back to their crushed bodies.

The overall feeling from Peirce's direction and the performances is not of exploitative horror but tragedy—hence my suggestion that this version of Carrie is more of a course correction than a remake. Carrie's life is full of pain and misery; it shouldn't be a celebration of her destructive potential. Her mother's death is one she regrets, even if her mother was the source of all her pain. It's a complex relationship that's perhaps too complex for the strict rigours of a horror film, a flaw of Carrie that I can admit to. However, I'm not certain I can agree with the abysmal scores and ratings this film has received. I was never bored—ever—and Peirce's command of visual grammar is top notch. I thought the performances mostly excellent, but this should be no surprise with the force of the two leads. I was very pleased with Carrie but I can appreciate the complaints. 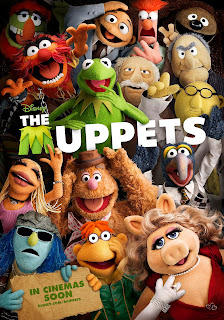 This film is so damn charming. Everything about it is charming, from its dad-joke vaudeville stuff to the unabashed sentimentality of it all. I remember crying so hard when the Muppets themselves, on the show, acknowledged the death of Jim Henson. They're never afraid to own their emotions, to accept how they're feeling about something. However, I did not care for the direction, especially the framing. Conversations are only ever over the shoulder shot-reverse-shot, but when there are singles, the giant head of the actor looms in the frame, like some Tom Hooper garbage. It's suffocating; let the frame breath a little, dammit. 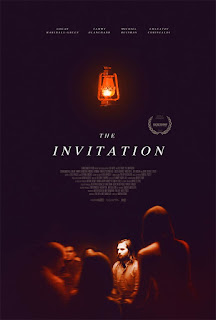 One of the rare slow burn horror films where the slow burn works in its favour. This is a film that isn't eager to reveal too much and it suffers when revelations are at hand. Until the late fifth act (using a Shakespearean structure), the film unfolds with startling efficiency and competency. Some criticisms of the film have focused on the quality of acting, but I wasn't terribly bothered by it. More often, I was engrossed in the careful turning of the screws, not so much in narrative tension, but in violations of the social contracts. For example, the host of the party, the antagonist, if there can be said to be one, keeps returning to "the invitation," the quasi-religious movement, despite the obvious discomfort of his guests. People are made visibly embarrassed by this topic, by John Carroll Lynch's character, but the host trundles on. Similarly, the protagonist finally loses his patience and has a confrontation, but the camera and editing keep lingering on the uneasy countenances of the other guests. The Invitation is more intrigued by the social lubrication and unspoken agreements on how to behave in public. Which doesn't quite mesh with the film's final ambitions, though it strains mightily to connect the dots.

The fifth act is where the film goes off the rails, unfortunately. Rarely is there a horror film where I wasn't into the violence and gore, but The Invitation managed to bore me with its climactic show-stopper. Part of the problem is that the brutality isn't brutal enough. One hopes that the film would go the route of Green Room and make things more felt, more visceral, more impactful. Instead, moments of violence seem perfunctory, far too quick. The camera seems almost shy when it comes to blood, preferring to look away or obfuscate with shadows or dim lighting. Characters are dispatched with little fanfare. While I appreciate the brevity of the violence is meant to be shocking, it feels rote, as if the film isn't even interested in going through with its own logic of escalation. 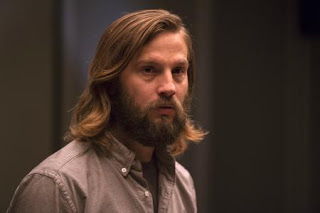 It helps that the protagonist, Logan Marshall-Green, is exceedingly pretty. I was under the spell of his beard and long hair right from the beginning. He's not an actor with tons of range (his moments of anger are laughable), but his mix of Paul Rudd (yum) and Tom Hardy (yum) was enough to force my eyes to stay on his face.

I also wish that the film hadn't revealed its hand so much with regards to the wine—the subject of few of the poster designs. The camera makes too much of the wine, lingering on it, putting it in close-ups. The result is that the audience knows to expect some poisoning; when it comes, the shock is deflating, perfunctory. Oh well.
Posted by matthew.