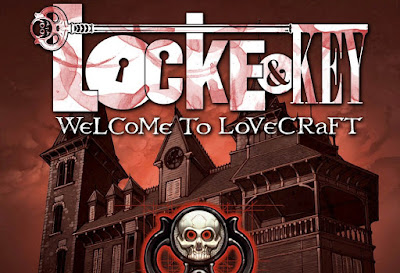 I'm very lucky: I work at a bookstore and sometimes receive free stuff. Most of the freebies come in the form of advanced reading copies (eg. I received Alan Moore's Jerusalem and have barely made a dent) but sometimes the receiving department provides free damaged copies of books—books too bent or folded to sell, but too costly to return to the publisher. Recently, I was fortunate enough to get my hands on the slipcase box set of Locke and Key; it had been seemingly crushed from the top during transit or packing at the warehouse. The box broke slightly and the tops of each individual collection (six volumes) have been irrevocably bent. However, it's still readable and the receiving people were kind enough to give me the entire set. This was providential timing as I had been toying with purchasing the three hardcovers that collected the entire series. I read the comic on my laptop—in one long sitting—and it has stuck with me enough that I wouldn't mind owning the physical versions.

Locke and Key seems like it was designed with me in mind: a single artist in an unbroken run (I lose patience quickly when the artist changes during a run), a limited run (I can't handle ongoing titles), horror (obvs), and seemingly coherent in the whole. Luckily, Hill and Rodriguez pulled off a major feat with this title.

Reading it a second time made more obvious the tight construction of the entire narrative. The creators clearly imagined the story in its totality before constructing the narrative, or perhaps more helpfully, they had the entire fabula in mind before constructing the syuzhet. The fabula is very influenced by how Stephen King structures his stories. An overarching obsession in King's fiction could be articulated as "we may be through with the past, but the past is never through with us." Although, honestly, I could say the same mantra about any work of mainstream horror; after all, what is a ghost but a manifestation of the past? However, King's specific story constructions include the slow unveiling of past events as they impinge on the narrative's present. Say, for example, the history of the town of Derry in King's magnum opus It.

Similarly, in Locke and Key, Hill and Rodriguez control the flow of information about the past. The protagonists' father and friends acted in ways that reverberates into the present, as if they put the pieces in place for the present narrative to pick up. The fabula consists of the first generation moving the keys across the board followed by the second generation picking those keys up. The syuzhet has the creators teasingly trickle out information as it pertains to the relevant present day narrative.

Over at Electric Literature, Jeff VanderMeer writes about knowing how and when to start and stop a narrative. He writes:


Once you get to the point where you have a sense of your story elements — the general situations, the impetus or driving force — you still have some decisions to make. You have the shape of your story — in this case, depicted as a lizard — but you still have decisions as to where you’re going to begin and where you’re going to end, not just the story but also your individual scenes. Where you end or begin your scenes is not only a question of pacing. It’s also a question of what’s right for the story you’re telling, for the kinds of characters that you’re using, and in the context of their unique characteristics.

His whole lecture is worth a read, even if it you might recoil at prescriptive writing lessons like I do. VanderMeer is articulating something that Hill and Rodriguez have clearly took to heart: knowing where and when to start the story and knowing when to deploy the oft-misused flashback.

One of my favourite moments in Locke and Key comes around the beginning of the second act: Kinsey Locke, the middle child of the Locke family, finds herself and her friends in the Drowning Cave, a series of caves once used as a military installation. They are looking for some graffiti possibly made by her father when he was a teen. After a narrow escape from drowning, they leave the caves, only for the narrative to reveal that at the bottom of the caves, deep underwater and buried by tons of rocks, there lies the decaying corpse of a woman. It's not until 16 issues later that the creators reveal how that corpse got there and who it was. A reader knowing the full history of the story, the full fabula, will have picked up that the creators hint at this corpse's identity many issues earlier, even earlier than when Kinsey descends into the caves.

Mostly, the showing of the corpse works as foreshadowing, urging the reader onwards. The reader wonders at the identity of the cadaver and hopes that the narrative will show its hand. Additionally, the dead person works to heighten suspense, that the games with keys are anything but play and that whatever secrets the past holds, it includes death. In addition to this, the corpse hints at the level of craft involved with the construction of the syuzhet: it becomes apparent through the masterful control of exposition that the creators did not simply deposit a dead person into the narrative without already knowing how and why it got there.

Locke and Key works for me in the same way that Alan Moore's narratives work for me: they are tight closed loops. Everything that is introduced at the beginning pays off by the end and the end validates and intensifies the work done by the beginning. What better example of the tightness of Moore's writing than pointing to the first meeting of the Crimebusters in Watchmen? 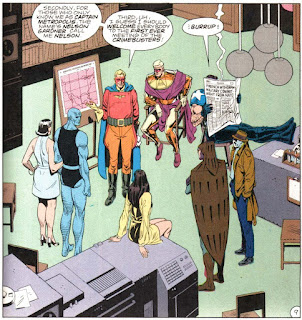 This scene is, without a doubt, the most important moment in the comic. Everything that happens in the syuzhet derives its impetus from this meeting. The characters assemble for the first time, Adrian gets the idea for the masterplan, Rorschach realizes the inefficacy of organized crime fighting, Dan begins to see Rorschach as insane (though the unhinged vigilante is vindicated in many ways), Jon notices Laurie, Laurie notices Jon (the beginning of their love is what convinces Jon to return to Earth after giving Laurie a chance to convince him), and most of these realizations come from their interactions with the key character and primum movens of the syuzhet, the Comedian.

Moore and Gibbons revisit the scene two or three times, only though in single panels, to convey the importance of this sequence. It's not until the end of the series that the reader realizes how pivotal this moment is for the entire cast.

Locke and Key features many moments of this type of construction: where and when keys are placed, lines of dialogue echo across the gulf of years, images reverberate, shiver and vibrate with meaning only after the fact. Tyler Locke, sitting around with Sam Lesser, asks Sam to kill his dad in a brief unthinking joke. This moment is revisited multiple times in multiple ways to underscore the theme of guilt (Tyler and his father Rendell suffer from their guilt, whether misplaced or true) and to underscore the theme of manipulation (Lesser has been convinced by the ghost of Dodge to do this, though Tyler thinks it was he that planted the idea in Lesser's head). Hill and Rodriguez bring up this moment maybe three or four times, each iteration working towards the complex tapestry of thematics that made Locke and Key the strong work it is.

Though, the series isn't perfect. There are multiple instances of well-meaning liberal ignorance, a trait Hill came by honestly from his famous father. There's the key that switches the race of the holder, from white to black and vice versa. It's used in only one issue but the creators stumble badly, making blunt, didactic gestures towards the complex subject of race, an almost irreducible part of American life. There's also the gender key, which is really only used for the syuzhet to obfuscate Dodge's true identity (his actual, in-story motive for using it is fairly empty and unthinking). Unfortunately, in a similar well-meaning but boneheaded move, the creators use the gender bending key to a) stress the binary of gender and b) imply that sexual orientation is tied to gender expression. As a young child, Duncan, Rendell Locke's younger brother, is dismissed a few times by other characters as the kid who likes to become a girl. Of course, the character who likes playing as a girl is the only gay member of the family. Ugh. Again, it's the best intentions of the creators to be progressive and liberal, but it has all the nuance and complexity of a brick falling on the reader's head. Moreover, it's simply wrongheaded.

Still, I love Locke and Key and consider it one of the best comic book series of the 21st century. Even with its faults and its wonky characterization (Tyler Locke never really emerges as anything but a blank slate, a boring white dude with nothing particularly interesting about him; the Spider Jerusalem analogue is irritating and tryhard), I think the series is beautifully constructed and endlessly recompensing. Few narratives reward a second reading; Locke and Key does so admirably.
Posted by matthew.