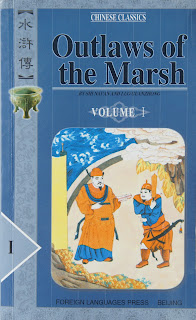 Though I managed to only finish one novel in the month of April, I made significant progress through two major projects which ate up most of my reading time.

I'm officially 25% of the way through The Water Margin, or in the translation I'm reading, Outlaws of the Marsh. One of the Four Great Classical Novels of China, The Water Margin is so far an incredibly dense read, introducing hundreds of characters, and slowly, so slowly, moving them into position. It's incredibly funny and packed with incident, though mostly light on interiority or reflection. Instead, it's mostly violence and expressions of brotherhood. I don't think the novel has even come close to hitting the Bechdel Test at any point.

I'm also just over halfway through Alan Moore's Jerusalem. Unlike the aforementioned Chinese novel, this one is dense as hell with interiority. Chapters are long dense histories of characters and their relation to Northampton, the setting of this longer-than-the-Bible novel. The middle section, The Two Towers part of the novel, is a single adventure in Moore's vision of the afterlife. I took a break from it not because I needed a break per se, but because I wanted to savour it.

Both novels are very long: Outlaws of the Marsh is 2,500 pages and Jerusalem is 1,200 pages of tightly packed prose with tiny margins. I'm not sure why I start this massive projects.

Koko was both a disappointment and enjoyable in equal measures. I complained to a friend, an expert on Straub, that the baroque ornate prose was absent, much to my disappointment, and the narrative seemed really linear, almost to a fault. It didn't feel like the ambitious intricate project I've come to expect from Straub: Floating Dragon is so carefully built and Ghost Story is a masterpiece of tiny gears working all at once. Koko had a straightforward story to tell and it does so in the way you would expect. Additionally, the great sequences of horror (not that this is a horror novel in the classic sense) rely on an obvious streak of Orientalism: the East is confusing, exotic, alluring, and frightening all at once.

There are two spectacular setpieces in Koko: the aforementioned bit of Orientalism, in which a character stumbles inexorably into the Singapore underworld discovering a backdoor moment of pure dehumanizing terror; and when the protagonist returns home from the Orient, unable to relate to his wife, unable to relate to his job, unable to function in bourgeois society. Much of Koko operates the same way Bob Clark's fantastic film Deathdream does: the sheer incompatibility of soldiers and "polite" society literalized as a horror film. In Clark's film, the returning soldier is undead, compelled to continue killing, despite his parents' vehement declarations he is unable to kill. Lots of late 70s and early 80s culture grapples with the integration, mostly failure to, of Vietnam veterans into American society. These boys were turned into killing machines, committed some atrocities, fully documented, and "survived" to return to a society distrustful, wary of what soldiers did and are capable of. This is what Koko does well: the horror of war is the truest purest form of horror not because of what one sees but because of what one brings back.

The second setpiece concerns the PTSD the protagonist has been stifling for 20 years finally manifesting. Mike's complete inability to relate to his already distant wife comes to the surface; he imagines himself an actor, playing a role, while his wife plays a similar role. The acting bit isn't quite convincing as metaphor ("we all wear masks, maaaaannnn!") but Straub's meticulous unraveling of their marriage through physical actions, or even lack thereof, is undeniably chilling. His wife (I can't remember her name, alas) attempts to initiate intimacy, wearing lingerie. She takes him in her hand, but he can't maintain his erection. Straub conveys all this with third person limited narration, from Mike's perspective: he wants to perform—in both sense—but he's so emotionally distant as to be in another galaxy. The narration presents all this as coldly and dispassionately as possible, almost Yates-like in its distance, a moment of form meeting content. Like the other major setpiece, this particular sequence works as horror not through the abject physicality horror usually works with, but through the cold unblinking abyss of trauma, the hollowness of humanity, the inescapable dread of not connecting, contra Forster's exhortation.

These moments of horror in Koko are effective but they're a bit few and far between. The novel isn't a slog; Koko is still gripping; Straub is too skillful of a writer to bore me. The novel just is, in the sense that it unfolds just as a novel such as this would. Perhaps if I hadn't read Ghost Story or Floating Dragon or had seen Deathdream, I might have been a bit more excited about Koko. As it is right now, the novel simply exists as a starting point for his Blue Rose Trilogy, which I understand to get more intricate and metafictional as it goes on.
Posted by matthew.