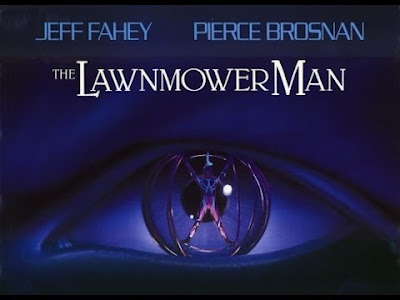 This technology is simply a route to powers that conjurers and alchemists used centuries ago. The human race lost that knowledge and now I'm reclaiming it through virtual reality.

One of the most quintessential films of the 90s arrives on Blu ray from Scream Factory, who have done as good as a job as they can with the transfer. Included in the package are two cuts: the theatrical, at 103 minutes, and the director's cut, at a whopping 141 minutes, making this the Terrence Malick of 90s horror flicks. I've been excited to rewatch this for some time as I've always been a fan of early cyber culture, including the early attempts at CGI contained herein.

And I'm happy to report all 141 minutes are worth a watch, especially for fans of say, Albert Pyun's Arcade and the late great television show Beast Wars. (I haven't seen enough of these, but here's a great list from Phil Sternwise which collects a huge amount of "cybertronic" films.) The Lawnmower Man is a 90s-flavoured Flowers for Algernon: Jobe Smith, the titular landscaper, is born with an intellectual disability, but through the miracle of science, he achieves a sense of normalcy with an increased intelligence. Like Charlie in Keyes' novel, Jobe reaches a peak of extreme intelligence, at which point, he sinks into ennui: what's the point of being smart? Unlike Charlie, though, Jobe never yearns for the days of being "simple," and unlike Charlie, Jobe seeks freedom through oppression and power. He uses his new powers, telepathy and telekinesis, to punish those who had wronged him. Jobe's godlike powers speak to a generalized and a specific fear. In the general sense, science fiction often reckons with a vague distrust and unease of technology. What new advancements in science can wrought, the novum of Darko Suvin's parlance, represents an all too human fear of progress. In the specific sense, this film speaks to a fear of the intrusion of a new space into our old conception of space, that of cyberspace, a world where the laws (of physics, of the state) no longer apply and chaos reigns. The Lawnmower Man helpfully visualizes this by integrating, through ecstatic scenes of death, the two worlds: Jobe introduces a tempest of virtual insects into the "real" world leading an orgy of violence; Jobe atomizes a corporate stooge, but reintegrates him, only to atomize him again, leading to a cycle of decorporealization and disassociation, calling up a metaphysical/technological Prometheus image. These two spaces, one abstract and one tactile, collide with awesome force, resulting in a fantastic (in the literary sense) unreality. The fear, the unease, the allure, is in the possibility of cyberspace acting upon the "real world" and in the possibility of what happens in cyberspace having real world consequences. In other words, the horror elements of this film speak to the vague, unspoken distrust that on-goings in cyberspace, on the Internet, could potentially impact and change political/economic/social status quo.


This technology has peeled back a layer to reveal another universe. Virtual reality will grow, just as the telegraph grew to the telephone - as the radio to the TV - it will be everywhere.

We might recall that cyberpunk is not a genre of science fiction, but an aesthetic mode, with all the ideological baggage which comes with that. Despite the “punk” suffix, cyberpunk was not really about anti-authoritarianism but rather a libertarian techno-fetishism that persists even today. Punk is meant to evoke a DIY, rigorously political aesthetic that critiqued the status quo and destabilized it with grand performative gestures. Cyberpunk, on the other hand, ended its dominance of the science fiction market by reaffirming many characteristics of the status quo, such as a deep nihilism, questioning even the point of trying to take back power, and the perpetual dominance of the straight white male, even in a postcolonial world. Cyberpunk should have been queer, in the political sense of the word, regarding that which is “normal” or “natural” with holistic suspicion. And in many ways, it did. Science fiction had never been so Marxist or radical in its critique of economic oppression. But the alternatives the genre seemed to offer were simply reiterations of pre-existing power structures, still distributed unequally.

Part of cyberpunk’s ethos was a distrust of the radical progression of technology up to that point, and the fearsome possibilities of its progression into the future. Suspicion of biomechanoids and cyborgs was rampant, despite Donna J. Haraway’s famous remark that she, “would rather go to bed with a cyborg than with a sensitive man.” The parallel but never intersecting evolution of humanity and machine was paramount to cyberpunk, as the writers (obviously a rhetorical construction on my part, as the writers assembled under the marketing term of cyberpunk were not a monolith of beliefs and ideologies) expressed the common fear that technology could indeed further embed the economic oppression of the lower class, or specifically, the gruff white dudes with trenchcoats and cigarettes.

Any emancipatory power suggested by the movement was exhausted by its repetition of the same old narratives, the same old nihilism, the same old white dudes. The Lawnmower Man, coming after the "end" of classic cyberpunk, does the same thing: in the end, a white man with unlimited power wrests control of the narrative from another white man with lots of power and wreaks havoc upon the world. Perhaps it's not even fair to critique this film for its abandonment of cyberpunk aesthetics and cyberspace suspicion for cheap thrills in the form of classic horror narratives. After all, the film didn't set out to be cyberpunk or evince any of its ideological or narrative trappings. But the film's success does speak to the ever-present colonization of anticapitalist movements by late stage capitalism. In 1993, Scott Bukatman identifies a new discursive motion in contemporary culture, the emergence of the “terminal identity”: “an unmistakably doubled articulation in which we find both the end of the subject and a new subjectivity constructed at the computer station or television screen" (in his book Terminal Identity). The computer, no matter how emancipatory its possibilities can afford, still owes its existence and prominence to late capitalism, the ever-flowing waves of products, the assembly line production.


I'll become pure energy. My birth cry will be the sound of every phone on this planet ringing in unison!

Subjectivity is at stake in this film: Jobe's subject position shifts as intelligence increases. His very identity, that of lawnmower man, is obliterated by his integration with technology. The deeper he goes in virtual reality, the faster he loses himself. He seeks not to merge with the internet, but to become the Internet. All of this slippage of subjectivity is contained in the wonderfully frightening and absurdly awkward virtual sex scene:

After being seduced by the promiscuous widow, Jobe finds himself eager to introduce Marnie to the pleasures of the digital. They enter the laboratory and hook themselves into the gyroscopes with their cybersuits on. Immediately, they being embracing in the virtual world, earnestly moaning with pleasure provided by the artificial feedback. They are not touching; their physical bodies are separated by at least 15 feet. Still, they experience pleasure. Or perhaps they perform pleasure. The line is blurred, just as their subjectivities blur: when they kiss, their digital avatars stick; when they pull their heads back, their faces stay melded together. The discreet pleasures of the digital mean a loss of the discrete analogues. 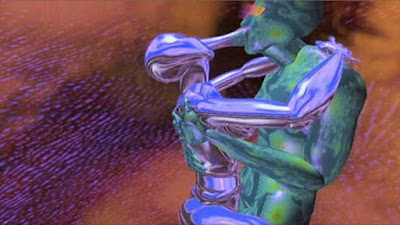 Their subjectivity is doubly articulated: the physical bodies, decaying in their cybersuits (literalized later in the film, when Jobe dispenses with the flesh entirely, leaving behind only a desiccated husk); and the digital blurring. As one state of existence affects the other, so does the opposite. Jobe's quest for knowledge leads him to transcend the earthly bonds of bodies, but he can never leave the physical world behind entirely. In the film's climax, he shows a brief bit of remorse when his sole friend Peter is endangered by his decisions; he helps the protagonists escape the ticking clock of the bomb, but he is not consumed in the inferno. Instead, he escapes into the internet, where he proclaims he'll be connected to "over 5,000 computers!" Still, his escape is not from the physical. His birth cry, he tells us, will be in the ringing of all the telephones. His subjectivity is spread out, doubled infinitely. Through cyberspace, he can now affect the globe simultaneously. Even our notions of time are upended by his godlike powers. Though he has no desire to make any systemic change. Instead, in true generically nihilistic fashion, he seeks only to cleanse the world of the infestation of humanity. Whether or not his plan is the same after his moment of doubt (with regards to Peter) remains to be seen. Like cyberpunk, his upending of the status quo merely rearranges the deck chairs on the Titanic, which is to say, the same inequality and injustice persists, but this time, power has shifted from the analogue expression to the digital avatar. Freedom for Jobe is not freedom for us all, unfortunately.
Posted by matthew.