The Good, the Bad, and the Ugly was a rewatch, this time on Kino Lorber's so-called 4K restoration. Apparently, the MGM Blu-ray is far too yellow in tint and looks awful. Kino Lorber's release was meant to remedy this problem, and it does, but in doing so, introduces new problems. First, indoor scenes have a teal tint, as if digitally colour corrected like a Michael Bay film. The uniforms worn by both armies in the film aren't as crisply grey or blue as they were in real life. This might work in the film's favour, as the blurring of the uniforms is thematically motivated, but aesthetically, it's a bit of a chore. On the other hand, any scene outdoors is beautiful: the sky is an alluring, almost aseptic blue, while the desert and other ecological zones burn with a yellow or orange. The film itself still holds up for me. It might be a bit too long, but it's never boring. Each scene is its own mini-drama, with a beginning, a middle, and an end. It's not my favourite of the so-called Dollars Trilogy. That honour is claimed by the darkhorse of the three, For a Few Dollars More.

I found Silkwood a bit of a disappointment. Like many biopics, the film struggles with its own intentions. Is the film meant to be a portrait of a person or a depiction of what that person did? The question is not merely philosophical as any answer will change the film substantially. If this film is indeed about Karen Silkwood the person, then I didn't get quite enough of a sense of who she was. The film doesn't invest in Cher and Kurt Russell's characters enough so Karen feels unmoored from the people she ostensibly considers family. Likewise, if the film is a chronicle of her labour activism, then the film fails even more. Erin Brockovich has the luxury of forming its drama around a court case, an intrinsically dramatic proceeding which lends itself to cinema, but Silkwood doesn't have this structure. Instead, the film focuses on Karen's amassing of evidence for the union's position in negotiations. These negotiations, barely depicted onscreen, aren't nearly as cinematic as a trial. And since the film is a biopic of an individual, the film ends with her death which isn't really the end of the story. Silkwood leaves the audience with onscreen text remarking the death was considered a single vehicle accident and that the corporation closed the factory. Perhaps wanting to avoid being the target of litigation, the filmmakers opted for safety instead of righteous ire and indignation. I did enjoy the performances, especially Cher's effortless one, but otherwise, this was a bit of a disappointment.

I think I've only seen the original Terminator twice before. I saw it long after I'd seen the second one. I was inspired to rewatch this after seeing a tweet (of course, I can't find it now) praising the look of the film. I picked up the remastered Blu-ray of it and I was blown away by how pretty the film is. Almost every frame could be printed out and framed. Always ahead of the curve, visually speaking, Cameron and his cinematographer Adam Greenberg soak the film in fuzzy lights, reflective surfaces, incandescent blues, and the odd piercing red. The movie still rocks, of course, being a lean and ruthless machinery of efficient storytelling. Truly one of the finest action films of the century. 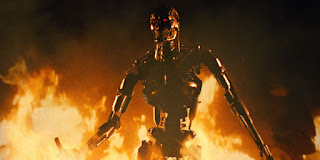 With Frankenhooker, I come closer to having seen all of Henenlotter's major works. The film is a blast (pun intended). Beautifully absurd and joyful, the film reminds viewers of a time when horror and exploitation were part of the margins of filmmaking and there's a solid exuberance to everything, even if the film coyly mourns the Times Square and 42nd Street of the past, lost forever to gentrification. It's absurd and entertaining, though certainly not sensitive to the lives of sex workers (who remain the butt of the jokes, no matter how the screenplay tries to care for them).

After rewatching The Limey a week ago, in anticipation for Soderbergh's return to multiplexes with Logan Lucky, I thought I'd give Roeg a try, an obvious inspiration for Soderbergh. Both Walkabout and Don't Look Now were tremendous works, the kind of movie I could see firing up budding filmmakers, showing young cinephiles the limits of what cinema can do. I liked Walkabout a bit more than I did the latter, thanks to the former's gorgeous cinematography, careful building of theme and characterization. Walkabout says some fairly routine things (the problems of communication) but in deeply resonant ways. I still liked Don't Look Now a lot, but it just didn't command my attention in the same way. Part of the problem is what Pauline Kael dubbed the film's "clamminess." Since reading Kael's review, I can't shake the word she uses. Like other master prose stylists, Kael had an ability to select only the most apt word possible, making it almost impossible to think of the object of the comparison in any other terms. The clamminess doesn't just refer to the literal atmosphere, of Venice during the off-season, but to the emotional distance. Affect isn't so removed as to be clinical, like a Kubrick, nor is it so pronounced as to be uncomfortably moist and close (like Spielberg). Critics have praised the film for its emotional maturity in its depiction of a couple dealing with grief, but I never got that sense. The relationship between the two isn't quite as defined as I think the film would like it to be. Add to this the very Italian ending, which I didn't care for at all, and you have a film I like, but I don't love. 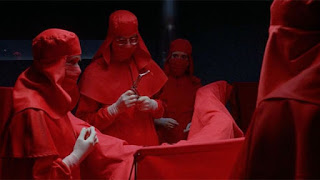 Dead Ringers was a rewatch, the first time in probably 12 or so years. I remember the film being a lot more sinister and malevolent than it actually is. I'm struck by the oft-stated critique that Cronenberg is cold or clinical when my favourite movie of his, and possibly one of my top five favourite films of all time, The Fly, is a heartbreaking tragedy which made me cry the first few times I saw it. Dead Ringers isn't quite the operatic tragedy The Fly is, but it's not nearly as exploitative of the twins as I remembered it being, or as the reputation would have one believe. Rather, it's quite sensitive to the inherent character flaws of the two, sensitive to their inevitable self-destruction. I like the film a lot, but it's in dire need of a trim; the movie goes on a bit too long.
Posted by matthew.