Dune by Frank Herbert
Cock and Bull by Will Self 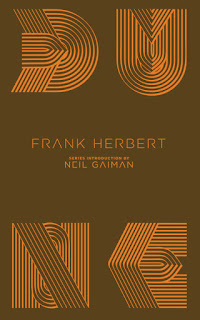 Ah, so I finally conquered Dune. And I liked it! A lot! I saw the film at the local theatre for a repertory screening, which inspired me to get around to the novel, of which I've owned three different copies (including, pictured above, a hardcover edition in the Penguin Galaxy series). The last time I tried reading this, years ago, I was bored to tears—too much talking, too much nonsense exposition about nonsense religion. The film version (which I reviewed here) is great, not despite in of its flaws, but because of its flaws (its relentless ugliness, its relentless exposition, its turgid voiceover narration). Mostly, I love Lynch's adaptation because it's weird. Just downright weird: squids floating in giant aquariums, explosive guns charged by sounds, dreams upon dreams upon dreams, etc. While the novel isn't quite as weird as Lynch's version (the Guild Navigators are never onstage in the text), there's still that persistent element from which Lynch drew for the film.

There are admirable elements to each version, such as the film's aforementioned weirdness, and the novel's strident commitment to ambivalence. After reading this mammoth thing, I can totally understand the appeal, why the novel is lauded so much, why it has fans to this day and has never been out of print. It's a unique beast, unlike anything else I've ever read from that era (though, I've yet to read Asimov's Foundation series, which I'm guessing is similar in its depiction of futurity and its futurity's aesthetics, a symptom of the era's collective imagination). Dune isn't simply a weird space adventure with a lone hero defeating all his enemies with laser beams, though that is an element to the novel. Rather, it's a deeply ambivalent examination of the nature of heroism and the exercise of power. For the first half, when Paul Atreides, our protagonist, is shuffled from one stilted conversation setpiece to the next, the text explores how power is focused, how it's applied. The Duke Leto uses charm, loyalty, the law—furnished by the State, in this case, the Emperor—to cajole, command, and lead. Many flashbacks and bits of internal narration provide clues to the endless lessons Paul has received in how to be a leader. The State isn't perfect, the characters shrug, but at least power is lawful and valid.

In the second half, after the Baron Harkonnen has manipulated the State (or has been manipulated by the State, or both), the lawfulness of power is in question. Paul must actualize power through extralegal means, such as rallying a guerilla army, a venture replete with logistical problems. The text explores how Paul's lineage, his nontraditional training from his mother (as opposed to the traditional masculine mode of leadership, detailed in the first half), and his destiny as Messiah provides the opportunity to seize power from the Fremen, to lead them to glorious revolution. However, the revolution against the Empire isn't nakedly liberatory as class revolutions would normally be. Instead, Paul's chain of decisions is meant to draw the Fremen away from jihad, away from genocidal war. Thus, the Fremen lack the free will and agency revolution would provide, replacing such with determined manipulation. It is through religious dogma that Paul controls the Fremen. Their whole religion is based on manipulation. Hence, the text's deep-seeded ambivalence, not simply about the nature of heroism, but even about the actualizing of power. The text subtly suggests that there can be no exercising of power without somebody to exercise upon. There is no freedom but an illusion of freedom under the guise of either a religious power or a state power—or both, as the novel concludes with Paul reconciling his religious cult leadership with lawful State power (a suitable marriage).

For a chunk of the novel, I was irritated by how many secondary and tertiary names things have. No utterance, no movement, no person was without a host of names, ritualistic and liturgical. Everything was laden, burdened, with religious significance. After the halfway point, once Paul joins the Fremen, I saw the text's strategy. The Fremen, like the Atreides, like the Harkonnens, are prisoners of discourse just as much as anybody else, whether that discourse be religious dogma or judiciary dogma. Their lives only have meaning through litanies (such as the "fear is the mind-killer" refrain) and through ritual. Their meaning is made through discursive utterances.

Cock and Bull wasn't great. Self's first major work, two novellas about people growing genitals opposite to their assigned gender, must have been edgy and refreshing in the 90s, but in 2018, it comes off as the longest stand-up routine from the hackiest comedian about biological essentialism. Self might be progressive in many ways, and could be even more progressive since this came out, but there's still a mean streak of misanthropy and transphobia running through this. The result of these miraculous transformations is always negative, always emotionally traumatizing. Any switch in body leads to heartbreak, the novellas seem to say. Our whole identity is produced by our body and not by the intricately meshed discourses of social conditioning and cultural norms. Which isn't to say the entire novel is worthless. Self's prose is still the highlight and pretty much the only reason why I read this. I knew I wasn't going to be on board with his edgy humour. I wonder how different these novellas would be if he wrote them now, or if even he would write them in the first place.
Posted by matthew.