After liking Children of Time immensely, I decided to invest—quite heavily—into his 10 book fantasy series. Well, it wouldn't be me if I didn't collect the entire series. This is a behavioural pattern I have been battling with myself since I was a child: I discover something I like and then I irresponsibly invest in everything I can around that thing. It's how I read most of Iain Banks, Chuck Palahniuk, Richard Yates, Stephen King, Michael Crichton, and how I owned, on CD, the complete discography of many artists, including their less acclaimed albums. For years, I resisted this behaviour... sort of... allowing myself to collect without collecting all at once. For example, the Doctor Who New Adventures. I managed to read about 12 or so before I had even made the switch to physical copies. I still have large gaps in my collection and have only purchased one online in the long years since I started the project (I just had to check but yes, I've read 30 of those things!). This, to me, is a significant victory over my collecting habits. Since I started working at a bookstore, I have been collecting books at a much higher rate, a dangerous rate; books are cheaper for me and free copies are easy enough to acquire. But I still haven't collected an entire series in one go like I did with Tchaikovsky's Shadows of the Apt series. I hang my head in shame. I invested heavily, quickly, before I had even finished the first book.

Thank heavens the book is good. This review on Goodreads makes some excellent points and one point I'd like to address. The main critique I'd agree with is Tchaikovsky's reticence in description. The reviewer writes, "The writing itself is sometimes a bit cumbersome with at times a frustrating lack of detail" and I agree 100%. Admittedly, I'm reading an early Tchaikovsky novel, and thus I have to temper my expectations that the writer isn't the accomplished and professional hand he has become. Still, I kept wondering why the narration wouldn't take a moment to describe the surroundings or the weather or anything that might increase verisimilitude, might increase immersion. While I've railed against realism in fiction before, I'm not naive enough to expect or demand the breaking of realism within what is obviously commercial fantasy fiction, albeit better-than-average commercial fiction. Sometimes I felt adrift in the character interactions and politicking without any sense of the physical world they inhabit. The narration's reserve with detail isn't a dealbreaker, especially when I found the worldbuilding intriguing enough without being the slog other fantasy novels usually are.

The other point the Goodreads reviewer makes is one I'm scratching my head at. He writes, "After that great opening chapter the middle of book was a bit slow." This is absolute bananas to me. If anything, I wish Empire in Black and Gold had slowed down. The middle third bounces its quintet of protagonists from incident to incident, never stopping to breathe. There are whole novels inside this one 600 page book, such as one character's infiltration of a local crime gang and her ascent to the position of right-hand goon. The whole sequence feels like it takes up 30 pages (it's probably more in reality) and this isn't the only blip that should have been expanded. There are kidnappings and enslaving, and prison escapes, and showdowns on airships, and more. The novel is jampacked with incident. While in the macro, most of the plot points feel motivated by the characterization rather than artificial plotting, which is to say it feels as organic as it can, in the micro, the novel often feels breathless and without any interiority. The reader is hustled along from one stage to the next. I can't imagine complaining any part of this novel "was a bit slow." (I'm about halfway through the second novel and its pacing has improved on its predecessor immensely but I'm sure I'll write about that when the time comes.)

The world itself is quite intriguing: humans have, in some way, inherited insectile attributes, distributed across races, not surprisingly named after those species. Thus, for example, we have the villainous Wasp empire, with humans inhabiting the aggressive and violent nature of their namesake; or there are the Moth kinden (the noun the novel adopts for the word race) who can see in the dark and keep to themselves. I'm interested in continuing with the series to determine if the author problematizes his own premise—as it stands, the concept of the series feels a bit... race realist, as they call it. Ascribing personality traits to race is horrifying comportment and what is the Shadows of the Apt series but the literalization of racial profiling? Skin tones in the novel vary from humanoid to blue to gray, with the author probably intentionally avoiding any non-white skin tones for fear of inadvertently saying something horribly racist. Hence my desire to see this through. Will later entries reveal the origin of these insectile gifts? Will there be the suggestion of a counter-narrative, such as in Gene Wolfe's fiction, that might suggest a science-fictional explanation or world? I'd like to find out.

No surprise, but I liked the second book a bit more. Feels like Tchaikovsky's plotting, while already good, is moving into the territory of great. He's got a lot of things on the go, but never did I feel lost. He manages just enough friendly reminders to keep me in the loop without ever annoyingly repeating himself, a rare and impressive gift, I should think. His characterization is quite good, too, pushing the cast in organic ways, having the drama come from the conflicts between character's desires and not artificially introducing conflict.

One area where he has yet to improve is description. I always get a good sense of how people feel and somewhat how they look, but where they are, what it feels like, always escapes me. It's especially frustrating during the long sequences of war that the novel is heavily invested in. And war is the name of the game in this one. There are long sequences of battle, almost enough to try my patience. I've never been one for action scenes in prose—action is prose's weakest element. Thankfully the whole novel isn't just war. Or else I'd probably tap out.

Two books in and I'm quite pleased with my decision. This is a professional and manageable fantasy series, an odd compliment for sure, but one meant wholly sincere. As much as I like Steven Erikson's dense and impenetrable fantasy, I never did finish the second book.

My copy of the third book hasn't arrived or I would have started it immediately! Alas!
Posted by matthew. No comments: 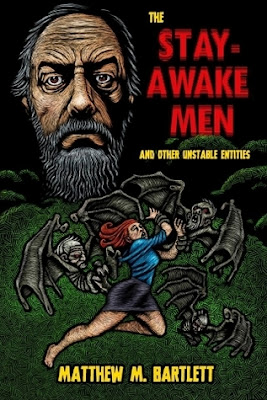 Jerusalem by Alan Moore
The Stay-Awake Men and Other Unstable Entities by Matthew M. Bartlett
Mystery by Peter Straub

My word I had a productive February: 9 books—two of which are "novella" length, and one of which was 447 pages of densely packed, tiny type; I did not read all of Jerusalem in one month lol. I read some long novels (Children of Time was over 600 pages; Mystery, Pushing Ice, and Dune were each over 500 pages). The grant total, if I might boast, is 3,716 pages of fiction in one month! My goal of reading longer novels for 2018 has so far been a success, especially since I completed Jerusalem, of which I won't say too much, as I'm hoping to write something a bit substantial (fingers crossed I find the energy).

It should be no surprise that I loved Bartlett's collection, The Stay-Awake Men and Other Unstable Entities. I purchased it from a small press in the US, and including shipping, the 93 page hardcover cost me over 50 dollars. Before purchasing this, I hemmed and hawed, wondering if it would be worth the steep price. The ratio of page to dollar was higher than I like to spend, he said only half facetiously. What finally pushed me was my memory of reading Gateways to Abomination (reviewed here, at the end of the post)(I didn't realize that was more than a year ago! It felt only like last year!). I adored that collection so much, and a smattering of Bartlett stories I had read throughout 2017 (including one that felt strangely out-of-character in this collection) so of course, I rationalized the expense and went for it. I wasn't disappointed. While not every story had the same zing and zap as others I had read, the collection on the whole is terrific, frightening, and beautiful. Bartlett's skills aren't simply in finding new spins on old horror tropes, nor his admirable skill in describing violence and gore, but in his unparalleled ability to sustain an atmosphere of unease and weirdness throughout the entire piece. The worlds in Bartlett's stories are recognizable as our own, but slightly askew, slightly off, providing a tremendous and horrifying potentiality—anything can happen in Bartlett's stories. His pieces do not seem to care about the traditional pathways of narrative in horror fiction—he zags where everybody else zigs. I know Mark Fisher would adore Bartlett had he read this obvious master of horror.

Mystery was an improvement over Koko (reviewed here) but not by much. This is my second Straub in a row where I wasn't disappointed, per se, but not overjoyed the way I was reading Floating Dragon or Ghost Story. I complained that Koko was missing the baroque prose and intricacy I was used to, and at least Mystery provides those two in spades. Reading this was often a pleasurable experience simply for Straub's delicate and tender description. You can tell that Straub likes to write and he likes to push himself. Here's an author trying something new every time, not repeating himself. Mystery improves on Koko thanks to its more myopic focus, on the emotional development of a single character, rather than the sprawling cast of the latter. Tom Pasmore, our precocious protagonist, is sometimes an emotional blank slate, a bit of a robot at times, but the overall arc, his disillusionment with the status quo, is more often than not compelling. The central mystery at the heart isn't as compelling, but one of the characters provides an explicit reason for this: mystery novels are often more about the psychological journey of the detective than the solution to the plot. We're asked, more than once, to consider how it feels to detect, to solve. I wish the novel had been a bit shorter; there's an affliction plaguing these authors from the 80s and 90s and that's bloat. Not all novels have to be 500+ pages, Mr. Straub. I'll continue with the Blue Rose Trilogy, as I hear the metafiction games get more complicated in the third volume.
Posted by matthew. No comments: