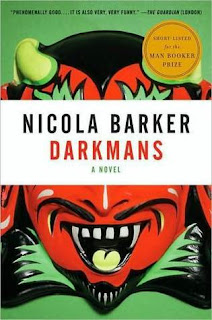 I bought the UK edition of Darkmans about a million years ago—never read it, of course, and sold it long ago. I shouldn't have but I'm also glad I didn't read it when it was originally released; I don't think I would have appreciated it at that point in my life, not so much because of my relative lack of life experience, but because of my tastes at the time. My interest in literature was only forming then. I was a baby, blinking into the stark bright light of the possibility of prose. The publication of Darkmans predates my blog by only 8 months. If you read my first few months of posts, you'll understand what I mean by this. I mean, after all, I did name my blog after a Richard Ford novel for god's sake. Darkmans is somewhat the antithesis of Ford's stuffy myopic self-centered fiction.

Darkmans is 800+ pages of almost nothing. Little happens in the novel beyond innumerable conversations and a dog that pisses on things. And yet I read this as fast as the cheapest paperback thriller. Part of the novel's appeal lies in Barker's seemingly effortless prose, her ability to describe things in wonderful, novel ways. Her lexical explorations and endless charm reminded me a lot of Ali Smith, the great Ali Smith, and it comes as no surprise that Smith herself has a blurb on the cover of the edition I read (the American Harper Collins edition, which didn't have the usual stiff British paper stock and wasn't UK-B sized). Similarly to Smith's work, Darkmans concerns itself with the myriad ways in which we're connected—not in the treacly "we're all the same, dude" sense that Hollywood only ever depicts—but rather, in a more complicated, inclusive manner, with history's long reach pulling us backwards into the grooves formed by our predecessors, but also forwards, allowing us to unshackle ourselves from repeating things. History isn't depicted as this rigid framework that gives us a blueprint for the future, but instead, as this fluid network, changing and shifting, mirroring the English language's evolution. Darkmans, playing with language and etyomologies, is funny as hell, a great comic work that never punches down.

I don't think I would have liked it, as I said, when I was younger. Its lack of interest in traditional plotting or the usual psychological drama of literary fiction (the kind peddled by Franzen, formerly a darling of this blog) would have confounded me. I don't want to say that I have better taste now (I still think Franzen's The Corrections will hold up but I'll never risk having my memories ruined by a reread) but I do think I'm a better reader, in that I pay more attention. My interests have shifted, for better or for worse. Thankfully, I can always discover old things new to me, like this. I loved Darkmans. Can't wait to read more of her work. 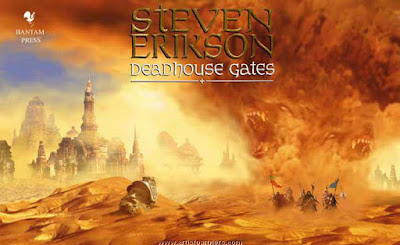 Two years. It took me two years to finish Deadhouse Gates. I finished Gardens of the Moon in March of 2016. I started the second book shortly thereafter, did about half of it, then took a break. Months (or possibly the next year) I read another few hundred pages. More time went by, until this week, when I powered through the final 200 pages, with the help of the Mazalan fan wiki. Thank god for fan wikis.

In the past two years, any time I picked up a fantasy novel, I found myself comparing it to Erikson's work, and usually, not favorably. While I quite liked the first two Shadows of the Apt novels from Tchaikovsky, they're aesthetically and narratively much less ambitious. Miles Cameron's Red Knight quintet (the fifth of which I haven't read yet) cites Erikson as a major influence, which feels obvious in Cameron's use of scope, obfuscation, and its cast of hundreds, though at their most difficult, the Red Knight novels are still nowhere near the impenetrability of Deadhouse Gates. Which is, perhaps, why it took me so long. Gardens of the Moon was relatively straightforward in comparison. I observed that Erikson was allergic to exposition in the linked review for the first book and boy was I in for a rude awakening with Deadhouse Gates.

Erikson's obscurantist style doesn't always work in his favour. Instead of hinting at something larger, more complex than the surface, a thematic interest woven throughout the text, the foreshadowing and secrecy often feels repetitive or even redundant. Character A will say something and Character B will reply, heavily implying that A has implied something they aren't saying. Or B will be interrupted by A just before revealing something crucial or helpful. Repeat ad nauseum. I distinctly remember giving up around the halfway point because I was tired of internal narration informing me that Character C wasn't telling the whole truth. We're told time and again people are withholding information, more so than any other bit of characterization. I understand that the second novel has the major task of opening up the world and introducing more to the overarching plot but a smidge of exposition can go a long way.

Though, when I was jiving with Deadhouse Gates, I jived with it well. Erikson's bleak worldview never feels oppressively or absolutely nihilistic. His world is a hard one, with little room for forgiveness, and grudges seem to last hundreds of thousands of years. Yet, his eye for detail, his desire to humanize even the refugees making a hundreds-league long journey across the land with little hope of succor and shelter, makes the horror all the more horrifying.

In the final hundred pages, once I got back in the swing of things, I kept asking myself what is the book about. Does Erikson have something to say other than a complicated plot and a ludicrous labyrinthine backstory? Is it just violence for the sake of it? Because for sure there is violence aplenty; the finale has ten thousand soldiers crucified, including the focal character we've been following for 900 pages. Is the theme of the novel "life's a bitch"? If that's the case, then why am I bothering? No technical bravura with plotting can cover up for a lack of something to say. I'm not sure, days after finishing it, and a hundred pages into the third book, that I can really answer this question. Maybe that's the crucial weakness of fantasy: it has little to say.

(A hundred pages into Memories of Ice and I can already detect an improvement in writing, not just the sentence-by-sentence prose, which was quite gorgeous already, but in Erikson's deft balancing of withholding and revealing. We'll see how long I last in this even-longer book)
Posted by matthew.