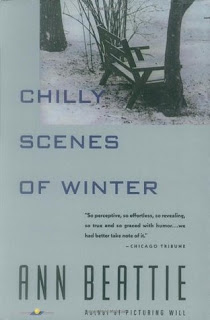 Of course, Beattie is a name I've long heard hailed, especially for her short stories. As I seem to be a little allergic to short fiction, I went with her 1976 debut novel. Set during the time between epochs, as if anticipating the upheaval and great change of the 1980s, Chilly Scenes of Winter depicts the delicious pain of waiting, the absence of events between moments. Charles, our protagonist, is waiting for his lover Laura to leave her husband. He's waiting for a new job, a new direction, a new anything to change his life. When confronted with the possibility of change, he leaps at it, hoping that this one shift will signal the momentous one, as the pebbles herald for the landslide. His mother is crazy, his sister is away at college, his only friend has just lost his job, and he can't seem to muster any interest in the limited possibilities for romance in his life.

While this does sound like ManPain The Novel, or the collected works of Jonathan Franzen, Beattie's light touch, aesthetic precision, and awareness of Charles' pathetic nature alleviate any of the gross manpain aspects. Laura, the object of his affections, is certainly objectified: when he imagines her, when he constantly obsesses over her, his thoughts are a melange of memory and fantasy. He remembers having those goofy couple moments every couple has (the kind that just can't be explained to an outsider with all sincerity and without couching it as some lark or silliness) and he imagines a life with her in the future. When they finally meet in the emotional climax of the novel, Beattie's narrator mentions twice Charles' focus on her ass. Charles' pretext for meeting is to have Laura cook him a dessert, the domestic symbol of orange souffle that he's been pining for. His dead father, his crazy mother, his dim but well-meaning stepfather have never given him the singular family unit he so desperately desires but can't really articulate. Laura and her dessert, Laura and her domesticity represent such a shift from his mother and her failure to mother. Charles is nothing but a lost child seeking stability and meaning.

He meanders from encounter to encounter, just as the novel does. In the review at The New York Times, J.D. O'Hara makes mention of Beattie's skill with situation, rather than plot. He writes:

Little in our own lives corresponds to this orderliness, and our own sensibilities are seldom so goal-oriented, except in supermarkets. Beattie understands and dramatizes our formlessness

O'Hara's aside of the supermarket is a sly nod to one of the recurring jokes in the novel; Charles has a nervous tic, since time immemorial, of checking and rechecking his wallet for sufficient funds when visiting the grocery store. He can't stop himself from this, even when he knows he has enough. He always has enough but he still feels anxious about having enough. A symbol, yes, but without the bright neon flashing signs directing our attention to its symbolic function. O'Hara calls attention to Beattie's gentle and skilled hand with symbols: "Such moments, with their texture of sadness and comedy, evoke our own lives directly, with none of the fashionable evasions of symbolism; they imply that life signifies...."

The more I think about this novel, the more I think it's one of the finest things I've read in a long time. Not only in its construction and scaffolding, but in the bricks of prose of which it is composed. Her short, declarative sentences, staccato without feeling terse, have the feeling of journalism. Beattie piles on details in long paragraphs, memories and thoughts and sensations, without too much flourish (a distant relative of Gass's technique of bombardment of seemingly inconsequential specificity) and the cumulative effect is almost journalistic. It's her eye for detail: she makes mention of a can of V-8 juice on the table, during a sequence of dinner preparation; she—and Charles—notices a pair of black boots on a woman; the narrator notices an absence of Muzak in an elevator. The absence hums through the novel, a background radiation affecting everything. Near the beginning of the novel, during a conversation between Pete, the step-father, Susan the sister, and Charles, Susan provides an illuminating clue:

"Kids dance nowadays, don't they?" Pete says, riding down in the elevator.
"Not much," Susan says. "Nobody does much of anything any more. I don't even think there are many drugs on campus."

The Sixties and its promise are over: Nixon is a crook (Charles imagines him tanned and golfing) and Kennedy is dead (Charles read the National Enquirer, which teases JFK is a vegetable with Jackie O tending to him, in secret). All that's left is the gaping maw of the future, a dark abyss to be filled with the hope of something—anything—happening.
Posted by matthew.