The pleasures to be had in the first half of McDowell's Blackwater series are legion. I've written before about McDowell's almost preternatural skill with genre fiction, a term used fondly, rather than pejoratively, which should be no shock to any longtime readers of this blog. McDowell was writing commercial fiction, meant to sell enough copies to keep him in house and home. He wasn't looking to produce art. Though, as time marches on, it appears that McDowell was wrong: he was creating art, long-lasting and utterly beautiful art. Look no further than his ever-rising reputation, among horror writers (Stephen King was a fan, citing McDowell in the preface to The Green Mile) and among readers (Grady Hendrix and the esteemed Will Errickson). Blackwater was, for a time, a unique beast in publication, but classic in its execution.

Errickson, in his "review" (I hesitate to use that word in conjunction with this essay, which feels more like an afterward to a reissue) at Tor nails it on the head: McDowell develops characters and events "economically"; he "well understands Southern life"; he tells "a leisurely tale" in "unhurried prose"; and perhaps most successfully for me, as a reader, McDowell "underplays supernatural occurrences, letting them happen organically, flowing as they do from the natural lives of the characters." The supernatural isn't quite a part of the fabric of everyday life; if it were, surely the supernatural would permanently lose its power to puncture our conception of nature and reality. The effect worked wondrously in the obscenely good novel The Elementals (here): the supernatural, while bothersome, murderous, violent, intrusive, still existed side-by-side with the family drama, the comedy, the characterization. This effect works thanks to his aforementioned "unhurried prose." He describes, at his leisure, with as little authorial intervention as possible (though, I'm sure, in aesthetics, the "absence" of narration is the illusion of an absence). Here, then, an example of his skillful hand with description:


In the black night, the water oaks swayed in the slightest win. The branches, rotted and covered with a dry green fungus, dropped twigs and leaves, or sometimes fell whole, with a crack and a thump, on the sandy ground. Beyond, the Perdido [the main river in town] flowed, muddy and black and gargling, carrying dead things and struggling live ones inexorably toward the vortex in the center of the junction [between the two rivers]. (The Levee 169)

(I intervene in the quotation just to provide some context.) His sentences are long, languid, with clauses bouncing after one another in a pleasing way. His descriptions are succinct without being too painterly and yet there's still the touch of poetry and musicality to some of his phrasing. Admittedly, this is the last paragraph of a chapter, when in pulps, authors stretch their capabilities as a stinger. 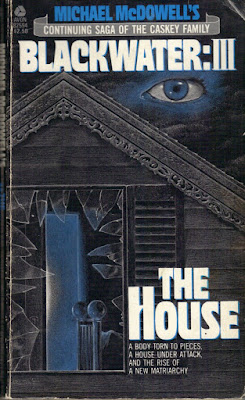 I also wanted to give a sample of his no-nonsense, practically clinical scenes of horror. I mean, that's what most people came for when they picked up a book with these covers! Here, a character dispatches Carl (a tertiary character, who exists only to die in the most horrific and entertaining way possible):


With one sudden, sure application of pressure Carl was driven to the earth. Because it was applied to only one shoulder, one side of Carl's body was instantly compressed. The clavicle gave way first, and then the ribs were jammed together and cracked. His lung was pierced with bone fragments and an artery was severed. The thigh bone was jammed up through the pelvis, the kneecap shattered against the ground. The shin and foot were crushed beneath the force. (The House 308)

This could very well read like an autopsy, and this is exactly what critics of horror fiction often complain of: there's an almost pornographic detachment to the corporeal, divorcing it from reality and turning it into a sideshow to gawk at, to leer at, with all the unsavory implications therein. But I'd prefer to read McDowell's unhurried description of horror as bringing a measure of maturity. For me, this sequence is death is all the more harrowing and scary for its lack of purple prose, for its lack of sensation. It feels journalistic and thus realistic.

Perhaps I'll expand on this when I review the other volumes: Blackwater passes the Bechdel Test in a myriad of ways. While not entirely reliable, the Bechdel Test at least helps bring attention to the general paucity, in fiction, of interactions between women not centering on men. Blackwater, so far, concerns itself with the machinations for power of two incredibly strong-willed women—this is a novel about competing matriarchies. One might dismiss the central conflict as cliched "women pitted against each other" tripe but McDowell's women are far more than dueling harpies. They're textured, sympathetic. Even the antagonist, if she can even be called the antagonist, demands some sympathy. Like all great villains, she is only acting on what she believes is right.

I might take a break at the halfway point, so as not to exhaust or diffuse my appetite for that which makes McDowell so compelling. Or maybe, McDowell will set a new record for consecutive novels by one author. We'll see.

* my pagination derives from the two volume hardcover set published by Avon Books in 1983. There is no ISBN as far as I can tell.

As for May in general, another very productive month of reading—and maybe more importantly, writing. In February of this year, I managed 3,716 pages of fiction in one month. I didn't quite hit that high in May, but 2,950 pages isn't a failure either. So far, according to Goodreads, I've read 13,172 pages. This number should be mostly accurate as I take care to log the ISBN of the book I read, not what I wish I had read.

I can attribute my successful run in reading these past months to two things: my abandoning Twitter and Letterboxd and my impending move. Packing boxes and going through books inspires me like nothing else to read even more, to finally tackle some of those dusty tomes. I finally decided to quit Letterboxd because I'd had enough of drama, I'd had enough of the rat race, and I'd had enough of trying to outdo everybody in terms of criticism. Twitter, and the internet in general, depress me more than it lightens up my life. Without any of these distractions, I've been firing through books.
Posted by matthew.