May Reads Part One 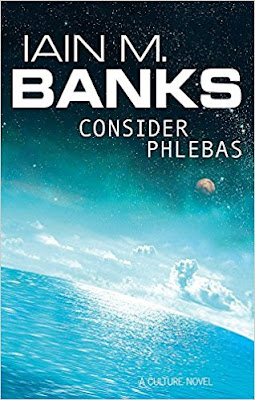 My last Banks read was 2 years ago (here) and I loved it. Though, Player of Games was the second book, and I'm guessing the first handful of The Culture novels can be read out of order. Consider Phlebas is the first Culture novel and from what I've heard, the worst. If that's the case, even if this one is worst, then it stands heads and shoulders above most space opera I've read, which shouldn't surprise me, considering my affection for Player of Games and Banks' almost hagiographic reputation.

Consider Phlebas has many things going for it: daring escapes, rousing adventure, bananas high concept ideas seemingly tossed out with abandon, as if Banks only had one novel to his name and wanted it to contain everything. It's painfully obvious Banks had a surfeit of imagination; the novel is chock full of all sorts of neato SF ideas and ships and names and planets and civilizations. And true to form, most of the novel considers these ideas thoughtfully, rather than including them for the sake of them, or because of market demands.

The novel depicts a mere moment in a long war between the Culture and the Idirans. Instead of the usual lone hero changes the outcome of the war by his personal intervention, Consider Phlebas suggests, quite wisely, that individuals, on their own, make very little impact on something so vast. Bora Horza Gobuchul, our protagonist, is an enemy of the Culture, for ideological reasons, and thus allies himself with the Idirans, though the Idirans want little to do with him. He's on a mission to capture a rogue artificial intelligence, a Mind, designed by the Culture for the purpose of piloting the gargantuan starships which play such a crucial role in the hostilities. The capture of this Mind could very well lead to a defeat. In order to make his way to the planet where the Mind is hiding out, Horza finds passage on a mercenary ship. Though the route is not straight, and there are many detours, including a failed assault on a Temple made of glass and a failed salvage mission on an abandoned starship. There's also a shipcrash on a beach populated by religious cannibals and a high risk card game with literal life-or-death stakes.

Ultimately, the recovery of the Mind is practically meaningless in the grand scheme of the war, something Banks is at pains to point out in the end. What interests the novel more than the usual space opera individualism is a tight focus on the choreography of the action, the novel's main strength and main flaw. Banks's narrator details the movements and consequences of everything during a scene of action, to an almost absurd degree. Sometimes this is hugely alluring, such as the ice drift crushing the abandoned spaceship, all detailed in loving specificity and almost slow motion awe. And other times, it's tedious, as it can be pages and pages of lasers and ducking and cover and shooting and smoke and destruction. The last 100 pages are a bit like that: endless action with little forward momentum. Some might find this an asset, because, as I've said before, action is not something prose is particularly suited for. Perhaps it's a case of "your mileage might vary" as I found it a bit of a mixed bag. The novel worked best, for me, when it was considering its ideas and when it depicted its colourful characters interacting (which is, no surprise, exactly what made Players of Games so stupendous).

Again, even if this is the worst of the Culture novels, it's still miles ahead of what most writers could even hope to do. I was reminded a lot of M. John Harrison's The Centauri Device (read in November of 2016): this must have been mind-blowing when it first came out. People were just not prepared for what Harrison and Banks did to science fiction. 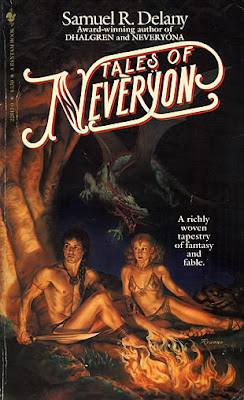 I last read Samuel R. Delany in November of 2016, with his superlatively good metafiction Phallos. Before that, going back more than two years ago, was Stars in My Pocket Like Grains of Sand in April of 2014. Every time I read a Delany, I'm almost literally in awe. How can one person be so good at what he does? A Delany novel makes you feel smarter for having read it; he teaches you critical theory through prose that's closer to poetry; he challenges your preconceived notions of society, gender, race, economics, myth, but without judging you. Delany's corpus feels arranged around the Deleuzian strategy of deterritorialization, a sort of sibling to the classic strategy of estrangement. Darko Suvin's exclusionary definition of science fiction includes the "novum" or the technology or concept which forces the reader to reimagine their own world with this new possibility. I say "exclusionary" because, as Jameson points out in Archaeologies of the Future, this definition perpetuates the false binary nodes of "science fiction | rational" and "fantasy | irrational." Tales of Nevèrÿon is particularly instructive for disassembling this binary thinking, as the novum in this story-cycle isn't technology in the layman's sense, but instead the fantasy civilization's shift from a barter economy to a currency economy. The novum, in other words, is coin (I wonder if Foucault would consider "money" to be a technology, which is why I said "layman's" because I didn't want to imply, without researching it, that money is indeed a Foucauldian technology). Thus, Tales of Nevèrÿon deploys cognitive estrangement in multiple vectors: the coming of a currency-based economy is heralded in the text by the coming of the "red ships," ie the culture bringing rubber to the land of Neveryóna for the first time. The complex flow of goods and money isn't presented fait accompli in the text, but rather, is suggested and implied, leaving the reader to connect the red ships, the bouncing balls—not named as rubber until the halfway point of the novel, mirroring the development of the new language required for new forms of trade and exchange—the coins and the vellum with special inks.

A key section in the fourth story provides illumination. The protagonist of the second story is now a secretary to a businesswoman, both new professions created by the emergence of currency and international trade. She is enjoying a cider in a public house with her employer. They're discussing the role of money and in turn, provide a clear definition for deterritorialization:


Nevertheless, I still wonder. Each of us, with money, gets further and further away from those moments where the hand pulls the beet root from the soil, hakes the fish from the net into the basket—not to mention the way it separates from one another, so that when enough money comes between people, they lie apart like parts of a chicken hacked up for stewing (161)

The alienation of the consumer from the product, the labourer from their labour, the civilized from the uncivilized, all considered in Tales of Nevèrÿon. Not surprising, but I loved it dearly. How could you not when Delany's prose is the best there is and his ideas glitter and shine. I tend not to read his novels consecutively, not only because each volume is dense enough, but because I want to savour it. There are only so many works by him to read and I never want to run out! I am, though, looking forward to three more volumes of tale set in Nevèrÿona.
Posted by matthew.