Cartesian Sonata And Other Novellas by William H. Gass
The Yips by Nicola Barker
The Bonfire of the Vanities by Tom Wolfe 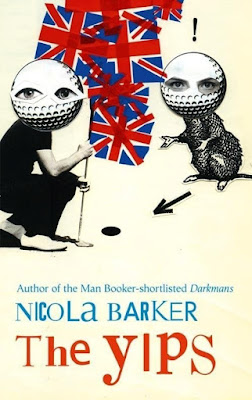 Nicola Barker is a genius. And, I suppose, I'm a contrarian. Why is it that I'm drawn to the novels with the lowest scores on Goodreads? Right now, The Yips is rocking a 3.12 out of 5 on that venerable book-rating website. The most popular review, by 20 likes, is fairly balanced; written by an obvious fan of Barker, the review mourns for the darkness and moodiness of her earlier novels (here). The writer ends his 3 star review with the recommendation of starting with Darkmans first. The second-most popular review, stamping The Yips with a singular and weighty one star, calls the novel "the biggest pile of horseshit I have read in many years" (here), complaining about the characters, calling them wooden and "arbitrary." The writer calls the dialogue, in which the novel is mostly composed, is "insufferable" and "offers very little guide to character or nuance." Yet, these are all reasons why I like the novel so much! I should start reading novels with low scores all the time, especially by women who are doing different and/or interesting things with the form of the novel. Ali Smith, the century greatest writer of puns, is frequently scored 3.5 or less on Goodreads, and she's one of my favourite writers. Perhaps it's the lexical dexterity in pursuit of the pun that vexes Goodreads writers so much. They all seem to hate Adam Roberts too (whom we adore around these parts) and he's the king of groan-worthy wordplay.

The Yips repeats much of Darkmans, in terms of aesthetics, formal play, and plotting: a gaggle of quirky hyper-verbal characters cross orbits in a snarl of paths with little in the way of high stakes plotting. Where Darkmans is obsessed with the long shadow of history, The Yips concerns itself with pain. This means the tiny (but very much welcome) history lessons of the former aren't nearly as present in the latter, though they make their appearance. Where The Yips improves upon its older sibling is in the intricacy of the plotting, what plot there is. Barker leans less and less on incident and more and more on the illusion of random interactions. Nothing is arbitrary in a Barker novel, not even the ways the characters' paths converge. In some ways, this has the effect of making each novel's universe small, in the same way, the Star Wars universe often feels small (there seem to be only Solos and Skywalkers in the entire galaxy), but her situating of the events within the smaller communities dotting the English country makes this shrinkage work in her favour.

The novel is funny, but then again, I find wordplay the funniest of all humour, so one's mileage may vary, comedy-wise. Humour is tricky and subjective. The construction of a joke feels infinitely more difficult to me than all the tragedies. Jokes have this incredible intricacy, requiring precision and care, exquisite timing, modulation of voice and pitch, all to elicit a simple laugh. I'm probably overthinking this.

All of Monty Python's available works have been uploaded to Netflix recently, and I've been thinking a lot about the appeal of the Pythons and British humour in general. My partner, watching me bray like a donkey at their antics, observed that they didn't really understand the appeal. I tried to explain: for Monty Python, it's the combination of high and low humour and a generous helping of absurdity. The Pythons were extraordinarily well educated, almost too educated (Graham Chapman was a non-practising physician). Their dialogue consisted of wordplay, of heaping words upon words upon words, all articulate and refined.

Barker isn't entirely in the vein of Monty Python, yet she and Ali Smith probably owe a bit to them: the wordplay, the mountains of words piled on each other, the fascination with etymology and the intrinsic comedy of funny-sounding words. These two sketches I've linked to here, while they're still available on YouTube, are the History of the Joke sketch, in which Graham Chapman explains simple slapstick in academic jargon, and the Travel Agent sketch, in which Michael Palin attempts to sell a travel adventure to Eric Idle, who cannot arrest his monologue about the tiny indignities and inconveniences of modern travel. Both are taken from Live at the Hollywood Bowl. Both sketches help illustrate Pythonesque humour: the absurdity, the surrealism, the endless waves of words, the high and low mixed together quite happily. Barker's much the same: neverending shovelfuls of words, with puns and trickiness.

Though, Barker's bag of tricks seem to wear on Goodreads readers. They find her tiresome, repetitive, with quirks instead of characters and an absence of incident masquerading as narrative. None of these things bother me, I suppose. My desire for realism and relatable character dwindles with every passing year and the 21st century's obsession with intricately plotted stories with nonstop incidents wears on me. Barker feels like an oasis, not one of nostalgia for another aesthetic period, but instead a different space where different authorial muscles are flexed and practiced. Innovation and experimentation aren't out of vogue; the much feted Rachel Cusk proves that; Nicola Barker makes this type of exercise fun and playful. It's what makes Monty Python so alluring: the mixture of high and low. 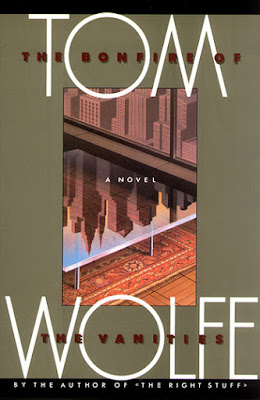 Tom Wolfe passed away last week and though I've tried to read two of his books multiple times, his idiosyncratic prose style thwarted me again and again. As I'm a different reader than I was last time I tried reading The Bonfire of the Vanities, and with his death, I tried gamely again to plow through. And I did, but with little success. My initial instincts were right, no matter where I'm at as a reader: Tom Wolfe might have had a huge contribution to journalism but as a novelist, he stinks. The plotting of this novel is engaging, but it's nothing readers haven't encountered with the pulps in an earlier time. What makes this novel so famous is its satirical bent and its aforementioned prose style. Wolfe brought his journalistic eye to bear down on every level of New York society, from its high ranking attorneys and politicians to its lowly dumb criminals. Inspired partly by the "city novels" of Dickens, The Bonfire of the Vanities uses a sledgehammer in the form of prose to make its point that New Yorkers are greedy and selfish.

You've never read an author use so many exclamation marks in their fiction before! Every sentence! Ends with one! It's like reading Jack Kirby's dialogue from his Fourth World stuff. Wolfe is also a big fan of sound effects, typing them out in painstaking verisimilitude. Instead of replicating a yokel's braying laugh with three "haw"s, Wolfe gives us eight or nine in a row. The eye glazes and slides across the page, protecting itself from the noise: laughs and coughs and shouts and gasps. Every possible vocal utterance is captured in this novel. It's exhaustive in its cataloging of all the different things American accents can do. Words and phrases are constantly repeated, first by the narrator without flourish, then again spelled out phonetically. Everybody speaks with an accent, a fact which should be obvious, but Wolfe wants to make sure. Accents have a class dimension, no argument, and they're part of the fabric of Wolfe's satire; without them, the joke might feel incomplete—and incomplete is anathema to Wolfe. The Bonfire of the Vanities must encompass the entire range of New York, a microcosm for ᴀᴍᴇʀɪᴄᴀ (also, Wolfe loves to use small caps to denote a volume of voice even louder than italics or regular all caps. They're the alpha male of yelling in this novel). In order to be so encompassing, every single character, no matter how small, gets a vocal tic or an accent. Even up to the very last scene, when the protagonist and his lawyer are being driven to an arraignment, the chauffeur gets to enjoy his moment in the spotlight, with exaggerated "yeahs" drawn out with copious vowels.

I'm a sucker for satire about 80s Wall Street doofuses: American Psycho is one of my favourite novels and The Wolf of Wall Street is my favourite Scorsese movie (even beating out Raging Bull and Goodfellas!). For the first 300 pages of this novel, I was having a grand ole time. Wolfe's eye for detail is fantastic, if exhaustive. The protagonist's first scene has him take the dog out for a walk, in the pouring rain, as subterfuge for making an illicit phonecall to his mistress. Wolfe perfectly captures the sodden trenchcoat, the sweat, the overheating from exerting one's self against a dog, even during the cold rain. It's all sharply drawn. But the problem is that there's too much of it. Every scene, no matter how inconsequential, gets this torrent of detail. Around page 300 or so, once Sherman McCoy is in deep shit, my interest began to wane. Wane! Extremely fast! Waning terribly! The denouement, the self satisfaction, grated on me. The smugness! Wolfe is so smug! In his satire!

I finished this thanks to the sunk cost fallacy. I took out the book from the library (third edition hardcover from 1987!) the day he died, along with The Right Stuff, which I hear is his masterwork, but I don't think I'll continue with him. There are too many better prose stylists than this clunky noise machine.
Posted by matthew.