I generally avoid modern mystery novels because I find the violence inherent to the genre quite distasteful. The victims end up being forgotten, or barely props, their bodies poured over in almost pornographic detail, and usually, the victims are women, their violent deaths "solved" by troubled but brilliant detectives. From the reputation and the covers, I avoided French's series. However, the admin department at my work are all going bananas for these novels. They're all reading them and gushing over them, and since I trust (some of) them, I gave the first one a try. The great big positive I can say is that it's readable and the solution to the mystery is an afterthought, in the best way. Murders can't be "solved"; murder is an irrevocable problem without a reversing fix. Detectives can only find the transgressor and hope justice might prevail. I prefer my mystery novels to either have no solution (such as George Pelecanos' sublime The Night Gardener) or consider the irreparable damage a murder can have. French's In the Woods has two mysteries, only one of which has a solution, and that solution is presented without any of the usual fanfare. In fact, the detectives figure it out during a interrogation, an almost quotidian ending compared to most climaxes. However, the drawback to this casualness is that the victim and her family are less important to the whole narrative than the narrator's emotional crisis. The whole cast, save for the narrator's partner, feel disposable, like props in a stageplay to be discarded during a soliloquy. Thus, In the Woods feels like two competing, opposing forces: an investigation into the way the past haunts us and a murder mystery about sociopaths and the lengths they'll go to get what they want. It doesn't quite add up and it's almost frustrating because French clearly has a way with words and with characterization. The prose reminded me a lot of John le Carre, surprisingly, in the long spools of twisting dialogue and the careful, melancholy observations of the physical world. Everybody in the back office says the second one is better so I suppose I'll keep going.

The Fungus was the most fun I've had with a horror novel in a long time. I'm struggling with things to say about it, but I think it captures the kind of horror I like the most: the fungus is unstoppable, it is everywhere, in everything, from the largest to the microscopic and it is so terrifying in its totality that the novel verges on pure nihilism, an existential panic so complete as to be paralyzing. This novel marks a great halfway point between the more implacable Weird fiction and the creature-feature genre, which externalizes an internal threat (in this situation, the fear of plague and contagion). Fungus is one of my favourite "characters" in horror fiction and I'm surprised more isn't written about this mysterious and singular kingdom. This, by the way, is the cover of the edition I purchased. 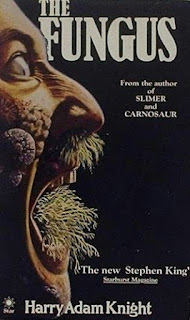 I found out last night that venerable (but expensive) publisher Valancourt Books is releasing new editions of this fantastic title and Knight's harder-to-find Slimer. I also picked up, just by chance, Knight's Carnosaur (the basis for Roger Corman's Jurassic Park cash-in). So look back for more Harry Adam Knight in the next few months because I definitely loved this one enough to give more a try.
Posted by matthew.