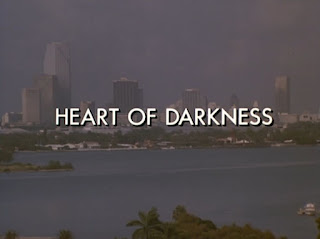 Thus begins my series of reviews, either small or large, of every episode of Miami Vice, which I bought on Blu-ray this week. I hope to maintain the format (the four items below the title screenshot) but I won't hold myself to a timetable for reviews nor a predetermined (and arbitrary) length for each review. Some might only be a paragraph (many will); others could take the form of an essay. I'm skipping the pilot episode because a) I've seen it a bunch of times before and I don't want to revisit it at the moment and b) surely there's been enough writing on it that I feel no need to contribute to the corpus on "Brother's Keeper." For this first review, I might talk about the meaning of Miami Vice to me.

When I was a small child, about 4 or 5, my parents were invited to a wedding; they purchased an off-the-rack suit for a child in light grey and pastel pink suit. I don't remember this at all, but I have seen the picture of me, standing next to a beautiful bouquet, and it has struck me, again and again, the fashion. I've also been, as far back as I can recall, a fan of Michael Mann and his singular aesthetic. I remember seeing Collateral in the theatre and being blown away. Collateral, along with 3 other cultural objects, make up my (hopefully not hypothetical) book on my obsession with California. Mann's depiction of Miami in the TV show isn't quite as impactful for me as his efforts to capture California. Yet, the same 80s sheen shines on this show as it does other cultural objects of the 80s that I find so fascinating such as To Live and Die in LA (the link goes to a piece on Letterboxd which functions as an almost manifesto for my book on California). For those that live in California, my dreamy-eyed adoration of a state I've only visited once might make sense, for isn't California the land of dreams? Others might find my starry eyes silly or childish. The situation isn't helped by my inability to articulate exactly what it is about the state which possesses me so totally. Miami Vice, created by Anthony Yerkovich (a fact often forgotten during Mann's ascent to auteur-god), is obviously not set in California, but shares some of the hallmarks of the 80s sheen which speaks of Cali so strongly. Where California famously has Googie architecture and design, Miami is well known for its pastel-coloured Art Deco buildings and Broadway typeface (famously used in the show's logo). I recently purchased an architecture book called Miami Beach Deco by Steven Brooke (here) which looks at the venerable pastel colours—which, fun fact, weren't the original colours: Leonard Horowitz, in the 1970s, painted many of the famous Art Deco buildings in an effort to preserve them for their historical significance (source). In fact, the palette his devised directly informed the TV show's palette (most notably, Mann banned the stars from earth-tone colours). 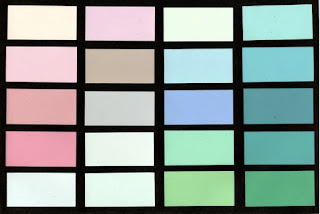 The architecture featured in Miami Vice is backdrop and I hesitate to characterize Miami as a "character" in the way some people refer to London in Dickens or LA in Mann's Heat ("it's like the city is a character itself"). Miami Vice loves its setting, don't get me wrong, but it doesn't feel essential. (There are positive side-effects to the setting, however, such as Miami's inherently diversity. The show leans into this realism with more Latinx actors than most contemporaneous shows.)

Case in point, "Heart of Darkness," the second aired episode, which takes the title from Conrad, and its interest in being subsumed by darkness, but doesn't take a literal journey to depict this. Crockett and Tubbs are undercover as New Jersey porn distributors looking to expand in Florida. They're moving their way up the illegal porn trade's ladder, trying to maneuver a meeting with one of the top tier criminals (the higher the guy, the bigger the bust). They're stalled out with Jimmy, a mid-level dealer, who keeps promising meetings with Artie, even though Sam Kovics is the boss and ostensibly the target of this operation. Eventually, after being "arrested," the detectives prove their bonafides and meet with Artie, played by Ed O'Neill (the notable guest star). The end of second act twist is that Artie is himself undercover for the FBI. The Bureau (significantly dressed in more 70s-style cop outfits, something the camera doesn't forget to linger on, as to demonstrate visually the difference between older cop shows (dated, ill-fitting, uncool) and our protagonists (cool)) reveals they worry Artie has gone through to the other side. Crockett can understand this dilemma; he's been there, and he knows. Tubbs, trying to argue with Crockett, remarks (quite famously) that there's undercover and not knowing which way is up (a line revised and refined for the sublime film version). After a tense meeting with Artie, the detectives go for a final meet with Sam Kovics, but their cover is blown thanks to faulty equipment. Artie, faced with the challenge of executing the protagonists, instead shoots his boss and murders Kovics (hiding in a limo) in cold blood. The denouement reveals Artie hanged himself.

Miami Vice is known for its nihilism, the relentless rat race that is police work: criminals are freed on bail just as soon as they're arrested. The cycle continues. "Heart of Darkness" boldly states its claim, not only with Artie's rather unhinged execution of Kovics with a submachine gun, but with his suicide as well. Sometimes going too deep means you can never get out, just as Conrad's Heart of Darkness suggests. The abyss stares back.

The main issue with this particular episode (other than its flimsy B-plot: amusing, but flimsy) is withholding Artie until the middle of the hour. The writers are faced with a tough choice, of course: the show is about Crockett and Tubbs and we see almost everything from their perspective (such as in classic whodunit fashion). The show can't follow Artie so we can't observe his descent. But the emotional impact of his heart of darkness is blunted by the scenes leading up to his reveal. We're taken aback that he is FBI, but we never get the sense that he's gone deep. A tough choice, as I say. The twist pops, shocking the audience, but it comes at a cost. Since this reveal comes at the halfway point, Crockett's sympathy with Artie feels a bit rushed. Yes, we know Crockett has some trauma related to his undercover work, and this episode begins the hinting towards this, but his rather hyperbolic reaction doesn't have the groundwork established to sell this to the audience.

While my partner and I were watching this (their first time ever seeing the show), I admitted I watch Miami Vice more for the style than the writing, which is typical cop show writing. Yes, its grittiness and realism contributed to the significant boom in 90s cop shows (NYPD Blue, Homicide: Life on the Street) but the show hasn't quite shaken the cop shows of the 70s (even some of the blocking, lighting, and framing in this episode feel very Rockford Files to me). I know the writing improves in some ways and worsens in other ways as the show continues, the danger of any American TV show produced by assembly line and produced in copious quantities (surely Miami Vice didn't need 24 episodes a year).

Which isn't to say I found the writing dismal. Rather, I just had to remind myself to see the blueprints concealed beneath the style for that which comes in the future. The writing is good for what it is.

Significantly, the episode rises above its contemporary cop show peers thanks to the MTV-inspired editing, specifically during a quite beautiful montage before the third act. Set to Devo's "Going Under" (the notable song I mention, though there are other good songs in the episode), the montage cuts between the detectives getting dressed, in dark rooms, with bold lighting, and shots of Crockett's car driving through the glowing streets of nighttime Miami (fun fact: this sequence liberally borrows shots of the car from the famous "In the Air Tonight" montage in the pilot). The staccato synthesized drums and the stark lighting have the feel of a music video, the intended effect, I'm sure. I wouldn't go so far as to call it abstract or avant garde, but the likes hadn't been seen on primetime television (and really aren't seen anymore aside from the superlatively good editing on Sharp Objects). The music video effects provides a sense of urgency (faster cross-cutting, more suspense), steering away from the traditionally languid editing of dialogue scenes. The fact that a TV show could and did shut up for 4 minutes for a music video is novel in of itself and I applaud it. I admit it's a retread of the pilot's famous scene, but boy it still pops.

There's also more alligator hijinks in the episode, which don't really work for me, especially since these scenes really give Tubbs nothing to do other than smile warmly at his partner's idiosyncrasy. As much as I love animal shenanigans, Elvis the alligator tests my patience.

I don't want to say too much more about the show as a whole for fear of repeating myself inevitably, so I will leave it here. I also won't be grading the episodes, just as I do with books, but I can say I enjoyed this episode quite a bit and my nostalgia for Miami Vice has been rejuvenated.
Posted by matthew.