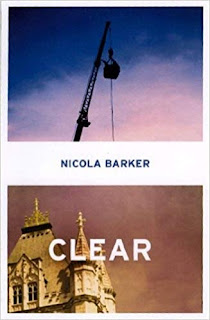 Nicola Barker's caffeinated prose is always the draw, even when she's writing about a subject I find unappealing, which is to say David Blaine. I'm a big fan of close-up magic, and watch lots of YouTube videos and mourn the loss of Ricky Jay, and Blaine's endurance tests, as with Houdini's escape feats, provide me with little to no excitement. I enjoy magic not for the magic but for the amateur's appreciation of skill vastly beyond my own. There are no stakes in illusionist schemes because every part of the game is rigged from the beginning (perhaps this explains my love for extremely competent protagonists such as the Seventh Doctor and Mike Carey's Lucifer, trickster gods who see in four dimensions). As nothing is risked, I feel no frisson when illusionists do dumb things like sit in a box for 44 days. I watch close-up magic for the same reason I watch martial arts movie: a drama played out with almost supernatural skill. Standing on a pole, inert, passive, or sitting and sleeping in a box isn't a trick. It's static and features no drama (such as "will he bring back the card he magically disappeared?"). Luckily, Barker's prose is in of itself a magic trick, something I've mentioned before.

Last night, I was reading Terry Eagleton's Literary Theory: An Introduction, mostly for his indispensable foreword and afterword, which operate as tiny history lessons, elucidating the social, political circumstances by which these theories (near and dear to my heart) were wrought. But in his first chapter, preposterously titled "What is Literature," he gives such a delightful explanation of what some of the Formalists were seeking that I felt it necessary to quote.


The Formalists started out by seeing the literary work as a more or less arbitrary assemblage of 'devices', and only later came to see these devices as interrelated elements or 'functions' within a total textual system. 'Devices' included sound, imagery, rhythm, syntax, metre, rhyme, narrative techniques, in fact the whole stock of formal literary elements; and what all of these elements had in common was their 'estranging' or 'defamiliarizing' effect. What was specific to literary language, what distinguished it from other forms of discourse, was that it 'deformed' ordinary language in various ways. Under pressure of literary devices, ordinary language was intensified, condensed, twisted, telescoped, drawn out, turned on its head. It was language 'made strange'; and because of this estrangement, the everyday world was also suddenly made unfamiliar... By having to grapple with language in a more strenuous, self-conscious way than usual, the world which that language contains is vividly renewed. (3) (my bolding)

I quote at length here, forgive me, because the Formalists, while operating under some serious methodological and ideological deficiencies (structuralism et al didn't really account for the plurality of languages and cultures and publics), articulated (by way of Eagleton) that which I find so alluring about fiction, specifically prose in fiction. The telescoping (lovely verb choice by Eagleton) of language paradoxically brings vividness and renewal to the everyday language by juxtaposition. My ability to enjoy language is improved when language itself calls attention to itself and in doing so, envelopes all language under its aegis of aestheticization. I appreciate language, I am grateful for language, even the terse bureaucratic office-speak, because I know, without breaking a sweat to find an example, that there is language being "deformed" for my pleasure.

And this, this is why I love Nicola Barker so much. Not in spite of her twitchy, annoying writing but because of it. I shall provide an example. Here, on page 244, cannily and archly sequestered in an aside, in parentheses, comes some of Barker's most poetic writing:


(How I love this damn bridge at night... Although I love it best at dawn; the sky tender and blushing like some uptight, Victorian virgin on the morning of her deflowering, the clouds crazily spiralling, the random puffs of vapour from the city's air conditioning, the tug horns blaring, a thousand lights on the riverside blazing, then gradually growing dimmer and more ineffectual in the shimmering glare of the rising sun) (244)

Barker employs a series of gerunds to bounce the reader along from clause to clause ("deflowering", "spiralling", "blaring") while each clause waxes and wanes according to the rhythm established. Notice how "tug horns blaring" is the shortest of the clauses followed by the longest, a two part finale, a showstopper. I don't particularly love the simile which starts it out, but its grossness is in character for the narrator. This is language which calls attention to itself as an aesthetic object. The description of the bridge itself is inconsequential; the whole thing is shuttered off in a tangent. What this tiny sample of Barker's incendiary flash writing shows is that Barker can write and she wants you to know it. I salute this type of writing. I much prefer ambitious prose to workmanlike scene-setting as if from a screenplay.

Book Twitter was yesterday set ablaze by some doofus' essay arguing against the semicolon. It's a trainwreck of an argument because he isn't arguing against the semicolon, as he pretends, but rather against writing which challenges or provokes. It's a different animal. (Here). He writes: "Nobody likes a show off.... The semicolon is a flashing red light that says, 'Hey, reader, I know things.' And flashy writing isn’t accessible writing." Therein lies the crux of the problem. The demonization of adverbs, multiple clauses, complicated sentences, heterogeneous punctuation and vocabulary is a symptom of what folks have called the "blogification" of writing. Writing has become less about aesthetics and about becoming more efficient at conveying information. Books are read for plot, it seems, and ornate, descriptive, beautiful writing gets in the way of plot. This is a fallacy of epic proportions. Many pulp writers, writers of the most commercial fiction can still arrange a beautiful sentence. People may not appreciate the prose at the conscious level, but most folks, almost all folks, can feel the difference between good writing and serviceable writing in their bones. I'm guessing, based on the bestseller lists of yore and today, most folks prefer writing which doesn't call attention to itself. Just like close-up magic is an art not appreciated as wildly as it could be, ornate show-off writing isn't beloved by many.

But that's okay! We all read for different reasons. I once read purely for plot. I read oodles of time travel narratives just because I love the way these narratives are shaped. Now, I tend to prefer wit and rhythm and rhyme and alliteration and euphony and general musicality. My preference for Barker doesn't make Barker a superior writer to say, Stephen King, who—let's not forget—is beloved around these parts. I'm just yearning for something different and Barker delivers in surplus.

I'll finish with a very typical exchange from Barker's pen. She loves synonyms, she loves rearranging a sentence, repeating it with a difference. Here, filed down to its more pure, is a classic bit of dialogue.


'Unceremoniously,' he exclaims. 'It took half a fucking hour. That cow used up the entire Thesaurus for "you're ditched, you insensitive twat".'
'Discarded?' I ask (rapidly catching on).
He nods.
'Jettisoned?'
He shrugs.
'Scrapped?'
He merely grimaces.
'Junked?'
He scowls.
'Renounced?'
The scowl deepens.
'Pensioned off..?'
'Enough!' he bellows. (135)