The Fall of Dragons 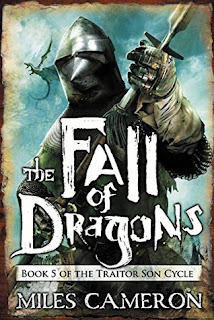 Could a reader of mine have predicted I would not only read a fantasy series, but finish it? And praise it? Well, not rapturously, but still praise it? I definitely finished it and read the final volume, all 600 pages of it, in 4 days. Let this review stand for both the individual volume and for the series as a whole.

Gabriel Muriens, the eponymous traitor son, has amassed his allied armies and marches towards the gates, interdimensional doorways to worlds unknown. He faces the Odine, a hivemind of body-possessing tentacles, and Ash, the Dread Wyrm, the fiercest dragon of all history. Will his plans, so carefully composed, come to fruition?

The series has been a sequence of disappointments after the first book, I'm afraid to admit. Though I found the experience of reading the third book the most memorable, volumes two through five are messy, chaotic, undisciplined bursts of high energy plotting. Cameron's plot gets away from him a few times, with too many threads. The first book, The Red Knight, has the luxury of a single setting, a siege plotline, and a manageable cast. The Fell Sword, the second, immediately introduces what feels like a million new characters and greatly expands the map—all necessary for the coming grand scale destruction and war Cameron has in mind. As fast as he introduces characters, all of them frustratingly similar, my investment waned. Every character speaks the same, a mix of arch tone and Brendan-Gleeson-in-Braveheart warmongering. Every character is smug but only Gabriel, the Red Knight, is called out for being smug. It's a sea of homogeneity but, I'll happily admit, most of the characters are charming in spite of their sameness. The lack of investment I had led to disappointment in the finale, as I had hoped the novel would be a bit more bloodthirsty in dispatching its cast than it is. In fact, Gabriel maneuvers his company to the back of the battlefield, sparing them and the audience of any heartbreaking death. The move makes sense in terms of Gabriel's character, but it's a toothless move from a series so gleeful in executing characters in a short sentence. If the lack of bloodshed wasn't irritating enough, the epilogue does its best to give every single character a neat little tidy ending. Everybody is happy! The world is safe! Despite all the incredibly harrowing horrors they've witnessed and participated in!

A final note of frustration before we move onto the positives: my god there are a lot of typos in this professionally published novel. Speech sometimes ends without quotation marks, words are missing from sentences, causing syntax errors, a couple speech tags are attributed to the wrong character. No spelling errors, though, leading me to believe a computerized spellcheck was at least used. The sheer amount of errors leads me to wonder. A company as big as Hachette and they can't get a professional proofreader? Even more bizarre, as I mentioned in my last review for the series, the spelling of "boglin" changes to "bogglin" for volumes four and five! I asked the author on Twitter about it, after verifying I wasn't imagining things (I used Google Books), and Cameron admitted it was his fault! How did his editor not catch this?  Mind boggling, or should I say mind bogling?

Normally typos don't bother me in novels (and I'll go on to say a bit more about immersion in a few paragraphs). They're almost inevitable when actual typesetting is no longer used. While typesetting wasn't impervious to mistakes, the process was at least another layer of editing. Although, I'm sure a Victorianist would argue a typesetter from an earlier era might be more likely to err as literacy wasn't as prominent.

Two paragraphs of complaint, but these moans are minor at best. Typos? Lack of three dimensional characters? Not book-breaking. Especially when Cameron is, overall, such a great storyteller. That he can lead a very skeptical reader of fantasy through 5 (long) books about dragons and knights and elves and shit is a testament to his prowess.

Reviewers have praised his commitment to medieval warfare realism, the most minute and detailed descriptions of sword fights and cavalry and armour. There's almost a bit too much of it; sometimes when the Latin (Italian? I'm not sure) terms are flying fast and furious, my eyes glaze over. I get the idea. I don't need a blow-by-blow, but at least it was different than I'm used to. The realism of combat felt fresh, at least compared to the usual action scenes I read in genre fiction, which is often written by dudes raised on action movies. There's this obsession with making prose replicate cinema, when scrupulous accounts of which fist moved where and how each leg twisted are ultimately enervating, an opposite effect to action cinema's usual exuberance. Cameron falls into this trap, but never to the level of tedium, thankfully. His sword fights are often short, a paragraph or two, and he provides them with dramatic enough stakes by including the physical exhaustion inherent to such exertion. The longer a fight goes on, the more desperate things become.

On the macro scale, Cameron's use of military tactics is realistic enough. Obviously I know little about medieval warfare and all the battle scenes, with their "lines" and "companies" and "reserves" left me a bit baffled. There's the illusion of realism, I suppose, as Cameron could have made all this shit up and I wouldn't be any the wiser. Again, something the reviewers have praised and so, in a way, I must. I bow before the author's superior knowledge and ability to integrate vast amounts of research into his texts. Rarely do I find info-dumps or extravagant displays of knowledge pull me out of the book. Even the idea of immersion fills me with skepticism. I've probably complained, offhand, about info-dumps (probably in a review for a Neal Stephenson book), but I feel I've modulated my opinion enough. "It pulled me out of the book" isn't, in my view, a fait accompli negative. Immersion can be so easily broken, I wonder why we laud it so much in the first place. I would be remiss if I didn't acknowledge my kvetching about typos earlier in this piece, so let me be clear: there's a difference between typos (there should be none) and internal reality-piercing efforts by the author. Cameron's research shouldn't be praised ipso facto, but neither should he be judged solely for his ability to integrate "organically" such research into the text. I use scare quotes around the one word to indicate I find combining organic and narrative a specious and scary road to travel. Characters and plot aren't plucked from the story-tree once they've ripened. What or who does it serve to imagine narrative in such a way?

The overall narrative of the Traitor Son Cycle is typical of the fantasy genre, with its single protagonist who saves the entire universe (possibly even multiverse), who is, of course, a straight white male. Cameron sprinkles strong women into the mix, a laudable effort, and mostly he succeeds in deflating the usual sausage party feel of fantasy fiction. The women he writes are mostly all the same, women version of Brenden Gleeson in Braveheart, but there are moments which glitter among the dull blandness of characterization, such as the saint Amicia, the nun with whom Gabriel shares such intense sexual attraction, though they never consummate the relationship, much to Cameron's credit. She's saintly, but struggles with her physical desires. Like almost everything in this series, it's far more compelling and successful in the first volume, and its force diminishes with each subsequent entry. A Goodreads reviewer made mention their difficulty in discerning Sauce from Sukey and I can't help but agree. Though I know now how the two women end up didn't help me during the middle moments when they're effectively interchangeable.

Luckily, as I mentioned, Cameron's one character, who he uses for everybody, is at least charming. They quip, ie my least favourite thing genre obsesses over, but at least the quips aren't Joss Whedon-style. God I hate hyper-articulate teens in the Whedon mode. I'm a bit older now than when I first saw and adored the Gilmore Girls but their banter now grates on me.

I praised Dave Hutchinson for dropping me without life-preserver in a sea of complexity with his Fractured Europe sequence and I feel for fairness's sake I should extend similar compliments to Cameron. Yes, sometimes his plot threatens to tumble, and yes sometimes he relies too much on characters exclaiming with awe "wow you really planned all this?" but the scale Cameron is working with lends itself to intricacy to the point of confusion. Sometimes not knowing every step of the way is freeing. For many members of Cameron's audience, an awareness of story structure and the fantasy novel is bone-deep. Withholding information, making us work for it, is commendable in of itself. Cameron doesn't always pull it off, but his ambition is praiseworthy. I would much rather obfuscation than hand-holding.

A true sign of success, even with all my quibbles? I want to reread this. I want to get deep in the second and third book with a better knowledge of who all these damn people are. It's the same desire I have to revisit Stephenson's The Baroque Cycle: now that I know all the cast, I can appreciate more the subtleties and intricacies of the plot. I will, one day, reread this, starting from the beginning. I might skip the fifth novel, which I think is the weakest of the five (a 100 page detour through three different universes and I'm still not sure what it accomplished). Well done, Miles Cameron. I'm not convinced enough to read your historical fiction, but I will give your new fantasy series a try.
Posted by matthew.