Asymmetry by Lisa Halliday
Into the Drowning Deep by Mira Grant
My Year of Rest and Relaxation by Ottessa Moshfegh
The Sea, the Sea by Iris Murdoch
Dreams Before the Start of Time by Anne Charnock
Killing Gravity by Corey J. White
Red Mars by Kim Stanley Robinson

I haven't yet determined if Halliday's debut novel is the best 2018 novel I've read or the greatest example of the Emperor's New Clothes I've ever encountered. My feelings for the clever novel swung from indifference to admiration and back again once or twice during the experience. Asymmetry is a novel of three parts: two novellas and a short coda, which is said to reveal aspects of the previous two parts. "Folly," the first part, charts the May-December romance of a young literary editor and a doyen of American literature, old and increasingly decrepit. In "Madness," an Iraqi-American is trapped at an airport waiting for the high security systems to allow him to pass through the UK. Finally, the coda is a transcript, a "Desert Island Discs" interview with the aforementioned grand master of American lit. If I might brag for a moment, I figured out the connection of the second part to the rest of the novel almost immediately in "Madness." There are clues, if clues is the right word, in "Folly" which point to the provenance of "Madness." I won't reveal them, but the coda confirms exactly my suspicions. Apparently, this link between parts isn't clear to everybody (check out the 1 star reviews on Goodreads), but fair enough. Halliday never explicitly explains. The structural ingenuity of the novel, a metafictional game nowhere near as clever as Calvino or Borges, both overshadows the smaller pleasures and bandages over the limitations of Halliday's writing. "Madness," while wonderfully empathetic and beautiful, is overwritten. Sure, one could argue (and people have) the floridness of the prose is intentional, in a metafictional way, but that's just hand-waving.

Mira Grant's mermaid horror novel was such a throwback to Michael Crichton novels: tons of science, populated by scientists, dealing with a horror sort of explainable by science, and facing their own hubris. What made the novel more tolerable than Crichton's schlock (entertaining schlock, but schlock) is a subtler thing. First of all, the novel is populated with women, not just one women, who is the bitter ex-wife of the protagonist (the usual woman character in these novels) but women plural. And they have conversations with each other. And they have sex with each other—okay, only two have sex with each other, but still. Secondly, and the more subtle aspect of this novel's overall success, is that conversations between people reveal a deeper emotional intelligence than writers like Crichton and Stephen King et al. Attention to paid to body language, not in the sense of telling the audience how characters are feeling, but in the sense of how characters are interpreting another character's body language, ie the classic emotional intelligence women are socialized to have and men are not. But Grant extends this to even male characters; she allows them to pay attention, even when they're morally grey or even black hats. In fact, the most villainous human of the cast is distinctly humanized by his proximity to and his love for his wife. He pays attention to her. Likewise, even a mermaid is given a scene in which to communicate. Lots of attention is paid to hands in this novel, not just the two (not just one, but two!) deaf characters and their interpreter, but to the mermaids and the hearing characters. Communication, the novel explicitly states, is more than words, but tone, body language, inflection, etc etc etc. Thus, my favourite parts of Into the Drowning Deep weren't the horror parts. I found the horror to be mostly ineffective; too little happens and by the time Grant burns the map and goes for broke, figuratively speaking, the tension was deflated. The horror was flat for me. The case wasn't helped by Grant's doom laden prose; every chapter or paragraph ends with foreshadowing to the deaths to come and instead of evoking suspense or anxiety, the result was like reading the lyrics to a really cheesy metal band trying to write Lovecraft. I did especially enjoy the reveal at the end, and how completely restrained it was. Restraint is an admirable ambition, if you ask me.

My Year of Rest and Relaxation was terrific, one of the best 2018 books I've read (not that I've read a lot). Moshfegh is an incredible writer, working to find ~350 pages of incident and writing despite an extremely passive premise. I don't have much to say about this other than the closest comparison I can make, in terms of affect, not aesthetic, is Bret Easton Ellis.

Dreams Before the Start of Time was read in a single day. It's a bit old fashioned in that it's science fiction of ideas, not plot, but characterization does play a significant part. The novel is a series of connected vignettes, following a family as it multiplies over one hundred or so years. Each vignette feels like a short story, though they require knowledge of the previous episode. I read this book in one day, after finishing Murdoch's The Sea, the Sea, and it was the perfect breezy chatty refresher. I love these mosaic novels, or hyperlink novels or whatever buzzword you'd like to use. That's why I can't stop thinking about The Race by Nina Allan. Speaking of which, click on over to Allan's website where she's hosted a conversation between her and Charnock. It's a fascinating look into process and of course they mention a bunch of titles I've never heard of so I had to add them to my to-read list. They of course speak of what they call "fragmented narratives." Here's Nina on the allure of them:


[T]hey made a powerful impact – something about the thrill of discovery, the way my own imagination played a vital role in linking everything together... Fragmented narratives are often described as being complex, and of course they can be, but I happen to believe that large numbers of readers actively enjoy the element of mental participation this approach encourages.

One of the reasons why I liked Asymmetry and The Race and The Fifth Head of Cerberus (reviewed in the same post as Allan's novel) was the work required in connecting the disparate threads, the participation and eventual satisfaction from either guessing correctly or being surprised. Dreams Before the Start of Time does not require guesswork from the audience in the same way. Instead, the time jumps ask readers to re-familiarize themselves with new situations each time, orienting themselves in the chronology and family tree. Though not a puzzle, Charnock's novel is superb for its perceptiveness, its observations on character and how the science fictional elements press themselves onto the cast.

Corey J. White's Killing Gravity is the first part of a trilogy, and represents an effort to bring grimdark's affect into science fiction. It's a fun novella, asking little of the reader, and in turn, giving explosions, gore, a cute animal sidekick, some quips (ugh), and some enby representation. The plot is fairly forgettable; something about a military-government genetically manipulating babies to be telekinetic and all-powerful and the protagonist seeking revenge for what they did to her. Killing Gravity is more style than plotting, thankfully, but the style isn't quite there. There's the sneer of cyberpunk and some of the weirder worldbuilding of say, Dick or VanderMeer, but prose-wise, it's staid. Still, I'll keep reading the trilogy; they're fun and easily digestible.

I'll write some more about Red Mars later, I think, but for now, here's an example of some not so great type-setting (jacking a car is the context). 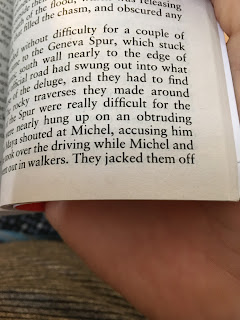