The Sea, the Sea 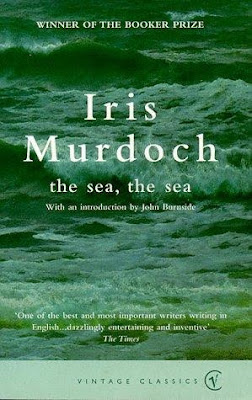 It's been literally years since I completed a Booker Prize winner (The Luminaries, here). My project to read them all stalled out after I started university, due to a lack of energy and a change in focus. I have some faint nostalgia for those heady, rushed years during which I voraciously consumed Bookers willy-nilly; it was an exciting time, reading-wise, as the project asked me read books I would not have looked at before. My tastes expanded. My cultural literacy increased. I remember a day, a beautiful summer day, when I walked to the library (I lived down the block from the main branch), picked up J. M. Coetzee's Disgrace and I read it in a single day thereabouts. I think fondly of that time, perhaps because of the relative peace and equanimity before my girlfriend of the time broke up with me, and perhaps because of the initial rush of freedom after university, when all of my reading time was my own. Funny how the project's temporary stoppage coincided with harrowing emotional shifts and drastic weight loss. Now, here I am, years later, much fatter, and balding, reminiscing when my hair was perfect, my social life existed. The blog helps archive but my memory remains for much.

This kind of self-indulgence is an apropos way of beginning a review for The Sea, the Sea, a long novel, winner of the Booker Prize in 1978, which doesn't begin for 91 pages in this edition. The first section, titled "Pre-History," does much of the stage-setting, so to speak, as Charles Arrowby, the retired theatre director, shuffles off to Shruff End, a house by the sea, where he will "adjure" the "magic" of the stage and write about his (unique, to say the least) culinary exercises and his memories. Long paragraphs of places, people, moments, and emotions flow from his pen, stymieing any modern reader expecting plot. This is my second time with The Sea, the Sea; the first I never finished it (obviously), frustrated by its passivity, its inactivity, its stodginess. Even now, as a different reader, the first section is a hump, an obstacle to overcome before getting to the meat. While this "Pre-History" is entertaining, perceptive, it doesn't vibrate with the electricity of the long middle section, when Murdoch lets loose, has all her characters on stage, so to speak. The manic setpieces in the middle are comic delights, theatrical farces with people coming and going, even if the reason for their exits and entries is darker, more corrupt than Charles himself would have you believe.

A monumental coincidence is the hinge upon which the plot turns: Charles bumps into his very first (and by his metric, only) love from when he was a boy. Hartley (her middle name) is now frumpy beaten-down Mary, wife of a void named Ben Fitch. Charles, intoxicated by the rush of memories, believes her to be trapped in an unhappy marriage. He rushes about, strenuous in his attempts at—not seducing her, but rescuing her from this trap of matrimony. When she resists, confused but determined to remain in her situation, Charles concludes the only solution is to kidnap her. Throughout this time, he congratulates himself on never forcing her, always allowing her her freedom if she so chooses, but eventually, she returns to Ben.

There are a multitude of other characters, other complications, including the coincidental arrival of Titus, the Fitch's adopted son. Other people in the novel seem to the sole function of vexing Charles, such as his cousin James; an ex-lover hellbent on destroying any of Charles' attempts at relationships; an actor debasing himself to be Charles' butler. Much of these characters exist only to provide turns in the plotting and fodder for comic setpieces. Only James, the cousin, appears to elicit thematic depth from the novel.

And there is much depth to this. The Sea, the Sea is a dense tapestry of thematic strands, so much so I'm at a loss to say what the novel is "about" without violently simplifying it. Murdoch's eye is brought to bear on the secretive nature of marriages, the lengths people will go to deceive themselves, the foolishness and sacredness of love, and of course the implacability of the sea itself. The eponymous sea looms in the horizon at all times in this novel, sometimes still but often sending its waves to crash at the edge of the reader's consciousness. Murdoch spends much time describing the sea in loving, threatening ways. Charles imagines the sea hosts a frightening marine monster, an eel of impossible dimensions, and it hungers for him. A symbol which works a bit better, not so naff, is Charles' repeated but always thwarted attempts at a rope to pull swimmers from the rocks where they emerge from their swim. Every time he ties a rope, the waves lap the knot undone. In other words, the sea has no interest in people's plans, in their ambitions, in the tiny dramas of their lives. The sea always gets its desires.

There is an edge of mysticism in the novel that my review is hopefully hinting at. In the final quarter, James provides Charles with some much needed reality couched in the verbiage of Eastern religion and exoticism. This is the late Seventies after all, when the occult and New Age began their inexorable conquest of bourgeois society. For some, such as The Guardian's Sam Jordison, this angle is nothing more than "mystical bollocks" (here). For me, Murdoch's almost-but-not-quite magical realism works: Charles, the Prospero figure (or so he would like to think) has given up stage-magic and trades it for a more meaningful, deeper magic of the real world. Whether or not he grows during this experience is left up to the reader. Though the sea gives him a sign at the end of his re-acquaintance with Nature (seals lark about in the pool where he almost drowned earlier), the postscript, an over-long epilogue shifts things. Charles' self-deceit is still prominent, but maybe not as powerful. Murdoch appears to be suggesting, subtly, gently, people can change, but only a little.

A novel of memory and its delusions but too long and perhaps not dark enough (?). The Booker Prize tally stands at 60%, 32 out of 53. Maybe I'll try to read another in a smaller timeframe than before.
Posted by matthew.