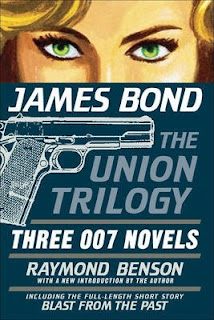 It's been 6.5 years since I read a James Bond novel (Thunderball). Raymond Benson was the third writer to take on the superspy after Fleming and I had always had my eye on the two omnibuses of his six novels. One being three discrete stories and the other a trilogy about a shadowy cell of spies known only as The Union. High Time to Kill is the first novel and reads typically like a 90s thriller and a James Bond novel: there's the protracted list of brands and products James approves, the sex, the exotic locales. Where this one differs is the mountaineering sequence, which takes up an entire third of the book, if not half, and goes into minute detail. I hadn't realized how alien and unwelcoming is the atmosphere at a certain altitude. The characters hike up to a certain point, the base camp of the actual summit, and there have to acclimatize to the oxygen content for a full two weeks! A question bubbling around me while I read was why couldn't they have taken a special helicopter up to the summit and if such a helicopter doesn't exist, why not invent one? But of course, this is the exact same question as "why didn't Gandalf send the hobbit on eagles if he could?" Which is to say, the answer is because then there would be no story. I read High Time to Kill quite fast and enjoyed my time with it, especially the mountaineering stuff. Many of the action sequences at high altitude carry an additional layer of suspense as the more strenuous and laboured your physical efforts, the more likely you will suffer hypoxia. The drama of combat then becomes more dramatic. I can't say I'm disappointed by this, as I knew what I was getting into.

I said to a friend I was washing the taste of James Bond from my mouth with le Carré's The Night Manager, but this isn't fair to either, considering how much I enjoyed, in a lower, almost primate level the Benson novel. This also implies le Carré's novel doesn't descend into the depths of the more physical aspects of the spy novel. It's a false dichotomy in other words.

The Night Manager, though, is a straight up masterpiece. I've waffled on this before, but I'm getting the sense the post-Cold War novels of le Carré are the better examples of his work. The espionage world after the 90s provides the author with more material to satirize, to evince his justified anger with the state of the State. The bureaucracy of espionage receives a better drubbing than in previous novels because MI5 and MI6 are even more useless than ever, mired deep in endless committees and subcommittees and memoranda and initiatives. The spies were being run by politicians and bureaucrats and le Carré provides no mercy from his cutting wit. Power has shifted away from governments and ideologies and now flows between individual capitalists and their corporate machines bearing their names. Greed is the most dangerous game now, not Soviets or public school-educated Brits with estates. To put it simply, greed has become the overriding ideology. The antagonist of this novel, Richard Roper, never really seems to be interested in the wars he's profiting from. He mentions how people will find guns no matter what so he may as well be the one who provides them. He makes gestures towards explaining himself, trying to sketch out his understanding of the world, but it's half-formed, unexamined, and how else would it be, according to le Carré. It's not simply a desire for money, but a desire for money at the expense of others. It's lack of duty of care. It's the absence of care. It's the black, soul-sucking, nihilistic empty void of care. le Carré doesn't bother with narrative opacity or subterfuge. Any of his usual tricks would just get in the way of his thesis. Greed is not good and has real material costs.

A word about the physical object of The Mars Room: I bought the hardcover (ISBN 978-1476756554) from my bookstore's bargain section, which sources everything not from dead stock in the store but from remainder houses. We never stocked the hardcover in the regular priced section because we had access to the paperback from the outset (ISBN 978-1982100759, dubbed, mysteriously, the Canadian export edition). I avoided this paperback like the plague because of its cover stock. The book itself works for me: French flaps, deckle edges, but the cover stock is that soft cover which picks up any and every fingerprint. I am an excessively oily person. This has its pros and cons. The major pro is that my face and skin aren't ageing as noticeably as other folks my age. I'll stay youthful thanks to my natural "moisturizer." The con of course is that I stain everything I touch. I could never commit crime without leaving ample evidence of my DNA everywhere. Thank heavens for the hardcover with its removable dust jacket (made of the same material as the paperback).

As for the novel, I liked it a lot. A different animal than I was expecting. I think many folks were mentally prepared for a retread, if darker, of Orange is the New Black, but Kushner isn't interested in the same kind of pathos, the same kind of gentle humanizing touch as that TV show. Instead, she seems keen on exploring the dark dank corners of criminality mostly ignored by media. Which is to say, the dumb criminals, the tragic criminals, the ones doomed to a lifetime of recidivism because of their social category. Much of the narration is almost hardboiled, specially in the old-timey sense of the word: hard, cynical, sneering. Perhaps it's a front put up by the first person narrator, to disguise the anguish, but the reader is given sustained looks into her personal pain, so I'm not entirely sure I'd call it a front. The Mars Room, with its subject of violence and societal corrosion, has moments of genuine beauty. It was a sincere pleasure to read. There's a tenderness for its hapless characters, which makes sense, as the not-so-secret thesis of the novel is that prison is dehumanizing and US society criminalizes the poor for being poor. Late in the novel, the narrator observes


The word violence was depleted and generic from overuse and yet it still had power, still meant something, but multiple things. There were stark acts of it: beating a person to death. And there were more abstract forms, depriving people of jobs, safe housing, adequate schools. There were large-scale acts of it, the deaths of tens of thousands of Iraqi civilians in a single year, for a specious war of lie and bungling, a war that might have no end, but according to prosecutors, the real monsters were teenagers like Button Sanchez (262).

"Button Sanchez" being a pregnant teen who gave birth in the prison and whose baby was taken away, but this could be any other character in the novel, really. The women in this novel were guilty of committing crimes and are reminded constantly by the guards that this was a moral failing, a character flaw. Again and again, guards harangue the inmates, "you should have thought of that before you committed the crime," but this is simplistic moralizing, the novel argues. Instead, like all good sociological literature, we should be examining the social structures which gave us for-profit prisons and their vested interest in recidivism. The powerful benefit from a carceral state, that's why they keep doing it.

If I had one complaint, and this is minor, I wish The Mars Room had spent a bit more time eviscerating the for-profit prison system specifically. It's at the edges, gently almost, but I wish there had been more time for a pointed focus. Still, a great novel.
Posted by matthew.