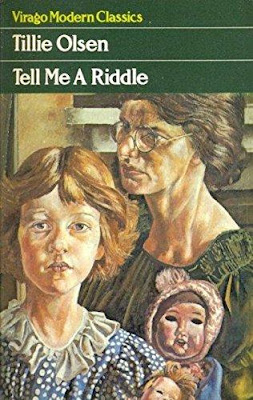 A short read, but an incredible and valuable read. Tillie Olsen's book of 4 short stories are rooted specifically in the experience of working class families and working class mothers. The 4 stories sort of overlap, as three of them (I think, maybe all four?) cover aspects of the same family. In the first story, the only one I'm suspicious doesn't connect, a mother stands ironing and considers her daughter's upbringing and tragic life. The parallel of maternal labour and domestic labour isn't accidental, of course. This was the shortest but makes its point quite cleanly and empathetically. The second story, my personal favourite, is a bit more modernist than the first. A sailor on shore leave stays with a family but his alcoholism threatens the friendship. I was reminded quite a bit of tough guy literature from the 40s and 50s, such as when I tried reading The Thin Red Line. There's an effort to deliver the sailor's speech phonetically and honestly so much of the dialogue features spellings and words like "whaddya mean" etc. The third story, my second favourite, is about the insurmountable barriers of race and class, focusing on the friendship between two elementary schoolchildren, one white and other black. The opening scene has the black girl bring the white girl to church where the white girl experiences religious ecstasy for the very first time, a novel way of implying the richness and depth of black culture and religiosity. The rest of the story has the two girls growing up and growing apart. Very heartbreaking but also inexorable in a way. This is the best kind of class-conscious writing, I think, the kind that doesn't explicitly tell the audience the structure needs to be dismantled, but showing us how the structures impact us in ways we're often not equipped to discuss. The fourth and final story didn't work for me as much as I'd hoped, considering it's the title story and the one Olsen is most famous for. An old Jewish Russian immigrant couple living in retirement contemplate moving into a assisted living home, but these plans are torn asunder by the intractability of the wife and her delayed diagnosis of cancer. The end is quite beautiful as both characters reach an almost mystical epiphany about the beauty of death, but the story felt a little long and by the time I was near the end, I was coming to close to being out of patience. All told this is an indispensable collection of stories. I will definitely be picking up her only novel, unfinished though it might be.

Dead Lions is the second Slough House novel from Mick Herron. I loved the first one, Slow Horses, which I read here and was excited to see how Herron gets on with a second entry.I can't say I loved this book but I did have a good time with it. My dissatisfaction has its roots in the novel's expanded scope. Not only is the cast bigger, but they are dispersed even wider. The stakes are raise in a somewhat unwelcome way, with explosions and an entire city being brought to its knees by threat of terrorism. And while this might be a logical extension of the spy novel in the twenty-first century, but it feels out of character for the kind of spy novel Herron is writing. It's almost like a capitulation to market forces, if you ask me. Where Slow Horses felt very literary and in the mode of le Carré, Dead Lions gave me flashbacks of reading airport thrillers, which aren't intrinsically bereft of positive qualities but I had hoped for more le Carré and less James Patterson. This is an insult to Herron though because Herron can write beautiful sentences and hilarious dialogue without it ever feeling quippy. Overall not my favourite Herron but I'll keep reading these for sure.
Posted by matthew.