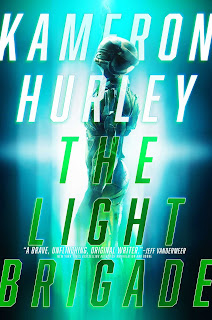 I've had a few Kameron Hurley novels on my to-read list but hadn't got around to reading any of them until this newest one, of which I received an advanced reading copy. The Light Brigade has a clever-ish premise: soldiers are deployed, via teleportation, to Mars to combat insurgents. The method of teleportation is to break the soldier down into light, send them at light-speed, and reconstitute them in situ. The drama is derived from the time displacement issues the protagonist is experiencing. She perceives her life non-linearly, hopping around from moment to moment. It's a clever conceit, a way to replicate, with science fictional elements, the absolute chaos and disarray and confusion when dropping into a combat zone. It's infinitely disorienting. Each new deployment has the discombobulating effect of the opening to Saving Private Ryan: beautiful chaos. But more so, as the protagonist must not only orient herself in the battle but in her own timeline. This is supported, thematically, by the complete absence of calendars and regular timekeeping instruments. No, not absence—the purposeful withholding of these orienting tools. The military organization keeps their soldiers in the dark as much as possible, drilling into them the maxim of "stick to the brief," ie follow these immediate orders and ask no questions. Hurley's political aims in this book aren't subtle: the soldiers are being lied to, the enemy they're fighting is not who they think they are, corporations are waging vast wars across time and space using poor people as pawns to fuel their practically meaningless competitions. This is not subtext; this is literal text. One character paraphrases Marx's thoughts on bloody revolution. All very admirable and I applaud Hurley for finding a way to make war unappealing (anti-war films mostly inadvertently glorify war due to aesthetics) and to tie a science fictional element into the themes. Well done.

But I found reading the book far less enjoyable than thinking about the book. Hurley's sentences are simplistic, short, as if I'm reading See Spot Run and not a novel for adults. I suppose, if one were generous, one could ascribe the relative plainness of diction to the protagonist's lack of education, but how then to account for the moments of poesy? No, it's safer to say that these sentences are the reality of commercial fiction. Yesterday, I had a conversation with a coworker about The Expanse series. She hadn't really heard of the television show, but when I explained how many copies of the numerous volumes we sell at the bookstore, she was befuddled. Who watches this show? Who reads these books? (I loathed Leviathan Wakes for its holistic blandness) This got me thinking about what we readers expect from commercial fiction. I can't help but suspect that commercial science fiction is calculated to answer plainly these questions asked by readers:
I started reading Claudia Rankine's Citizen last night, an example of an opposite to commercial fiction, and my partner informs me Rankine designed the book to be less edifying and more experiential. She didn't want the usual methods of analysis weighed against the book in order to extract meaning from its words, thus abstracting the feeling, the political immediacy of the work. Thus, the book resists the usual mode of close reading. It also made me uncomfortable. For all my good white liberal hand-wringing, I'm still complicit in and benefit from white supremacy. It's politically necessary to induce discomfort.

The Light Brigade does not do this. Its aesthetics can't be described challenging, leading me to believe its simple sentences are strategic: the clarity of the message cannot be risked by anything so fancy as poesy. But is Hurley changing any minds with her safe science fiction tale, so easily consumed and so easily forgotten?

I'm torn by this novel. I did read it—quickly, in fact, surely a sign of competence. But I took nothing from the novel. I felt nothing, I was unmoved. Even though its subject matter was categorically adult (violence and gore and war crimes), the novel never felt grown up. It doesn't help that the spectre of Joss Whedon hovers over this, just like he does with so many geek properties. Characters aren't people; they're collections of quips and quirks. Every person the protagonist meets gets the barest minimum of characterization.

I haven't been able to stop thinking about Gretchen Felker-Martin's essay, "I Don't Wanna Grow Up (And Neither Can You)" (here). She argues the necessity of transgressive art, the worst kind of art which wallows and even possibly celebrates the darkest possible aspects of humanity. She writes, articulating what I'd hoped to but better:


From the callous Islamophobia of the Iron Man movies to the US Air Force and CIA-approved wokeness of Captain Marvel and Black Panther, the whole enterprise is bent on saying as little as possible while looking as socially conscious as it can.

Gone are the truly radical works of art, for they have been erased or sanded down by the Left (and the Right, let's not forget about their moral crusades) in an effort to "protect" the marginalized, the traumatized, the wounded. Felker-Martin argues, passionately:


But what's left in art once you scour away the things that make you uncomfortable? What's left for the people who make their living and/or maintain their sanity by approaching our own suffering from a place of skill, assurance, and safety? What's left for readers and viewers trying to grow as people, to find empathy for those they've been taught to despise, to understand their own sexual shame and fear? What's left for people struggling with the isolation of abuse who have no support and no words to help them name it?

How can we grow if we can't explore the deepest, most taboo parts of our psyche? She demands we ask of ourselves what happens when all media confirms our pre-existing political, sexual, personal beliefs. We can't grow up if we don't ask, of ourselves, the difficult questions. For many folks, exploring the darkest, most traumatic aspects is the only way to come to grips with those same traumas.

Of course, you might disagree. That Hurley is arguing for communism is radical in of itself. That Hurley's expose of war crimes committed by soldiers is radical, is traumatizing, is taboo, for in the United States, the veneration of the military is taken as gospel. And I might perhaps agree with that. This might not even be a fair example of commercial fiction to examine through this lens. Maybe I'm reacting negatively against a book which ticks off all the right boxes and I'm just being a contrarian for the sake of it. I offer no easy answers to this.
Posted by matthew.