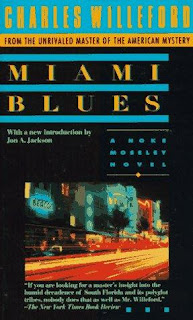 I've marked down somewhere on this blog that I've read Miami Blues and I don't think I finished it. I remembered the first third or so, but the turn at the halfway point, I did not remember (the synopsis on the back of the in-print edition gives the illusion this turn is the opening incident, which is not the case, and I'm glad I hadn't spoiled it for myself). I also don't remember the book being so weird, so offbeat. I'm extremely suspicious of myself. I think I wrote down that I read it just as a way to inflate my numbers! J'accuse!!

I wonder what my reaction would have been had I finished the book. Certainly, I was kept off-kilter for almost the entire book by its aesthetics and I suspect a younger me might have been put off or have penalized the novel. I'm not sure I'm wiser now, but I think I'm more open-minded when it comes to aesthetics. Miami Blues is one of the weirdest crime novels I've ever read and I'm not 100% not referring to the plotting. Nothing particularly abnormal or outside the lines happens, nothing that wouldn't sit comfortably in a Leonard novel, but it's all in how Willeford tells his tale that made such an impression on me right now.

His Wikipedia page gives insight into the uniqueness: novelist Steve Erickson is quoted as saying, "The camera's not really focused on the middle of the scene. It's a little bit off. They're not plot driven or language driven, which makes them really different from most major crime novels. They're character driven and cunning in a very eccentric way" (here). The language isn't particularly beautiful—no one would praise him for poesy. And, as I said, the plotting isn't all that wild, either. But there's just something off about everything. Part of the effect derives from how flat all the description is. There's lots of paragraphs giving step by step directions the characters are taking, which highway and which street and that same flat delivery is used for scenes of violence. The gore and gunshots and bodies get the same treatment as clothes, booze, cars, desks, coffee, food. But Willeford rarely pays lavish attention to whatever object in the scene might be the central metaphor. Hoke Moseley's false teeth, for example, are rarely described or focused on, even when they're being thrown out a window. Broken bones, shot faces, blood and guts are rarely lingered over. Like Erickson says, the camera is just always off a little. Here's the inciting scene, when the antagonist meets a Hare Krishna in the airport:


"I want to be your friend," the Hare Krishna said, "and—"
Freddy grasped the Hare Krishna's middle finger and bent it back sharply. The Krishna yelped. Freddy applied sharper pressure and jerked the finger backward, breaking it. The Krishna screamed, a high-pitched gargling sound, and collapsed onto his knees. Freddy let go of the dangling finger, and as the Krishna bent over, screaming, his wig fell off, exposing his shaved head. (3)

The actual breakage is just a single phrase but the noise the victim produces gets three sentences and a variety of sounds: yelp, gargle, scream and then a repetition of scream. Just fascinating choices.

In the next chapter, Hoke, his partner, an assistant DA, and the coroner are talking about the man killed of a broken finger:


"...I'll have to research this case, that's all. We can't do anything about it anyway until you catch the man in the leather jacket."
"That's all we've got to go on," Hoke said. "Leather jacket. We don't even know the color of the jacket. One guy said he had heard it was tan; another guy said he'd heard gray. Unless the man comes forward by himself, we haven't got a chance in hell of finding him. He could be on a plane for England or someplace at this minute." Hoke took a Kool out of a crumpled package, lit it, took one drag, and then butted it out in a standing ashtray. "The body's all yours, Doc. We've got all of the stuff out of his pockets." (11)

Mostly I quote this to highlight the single puff on the cigarette, but also to get a feel of the dialogue. People don't talk like this, but it also isn't stilted enough to sound false. It doesn't sound real but it doesn't sound not-real. It's like Willeford is editing a transcription. Again, it's that off-kilter feel to everything. Of course there's a standing ashtray. Of course he adds "or someplace" to the hypothetical location. Why England of all places? The world in which these characters live in is weird.

Speaking of which, I was worried, for the first half, if this novel was secretly reactionary, secretly upset with immigrants, with how much crime non-white people "bring" into the US. Though Hoke is investigating this one crime, he's also busy with a quadruple homicide, one of the victims being a child, and another being a hotel maid. There's a misanthropic vein pumping under the skin of Miami Blues. Another aspect of the off-kilter vibe is that the antagonist, Freddy, keeps stumbling upon crimes-in-progress. He goes to the mall and watches a pickpocket; he pops into a convenience store for milk and interrupts a stick-up. Everywhere he goes, he runs into crime already happening. Miami, in this novel, is Hell, a thieves' paradise, a hotbed of ceaseless crime, shit piling up and up, with cops barely able to keep their head above the tide, or swimming with it. Hoke's cop friends are always on the verge of retiring because of the crime. One cop complains a guy on the street threw a cinderblock through the police car window.

But the novel is also at pains to remind us Freddy is piece of shit, too. A "blithe psychopath" he's called in the first sentence of the novel. Though the reader might see a reactionary position, a hatred of Latino folks, the truth is that Willeford is frustrated with the systems of inequality, the way the gears grind, how the machine is lubricated with the blood of the poor. Innocent or criminal, the poor suffer in Miami Blues. Either they're destined for crime by dint of class or they're destined to be victims. All the while, in the background, never seen and never named, are the ruling classes who own the properties, the highways, the freeways, the very city in which they live. The threat of property development lurks on the edges of this novel all the time. It's capitalism to blame for the cycles of violence these characters find themselves enacting repeatedly. Of course, there's no accounting for "blithe psychopaths" in this schema, but he at least gets his comeuppance.

Yet another example of Floridian literature where the panhandle feels like an alternate dimension. It sounds like America, it feels like America, but it isn't. There's a great moment where Freddy orders a Denver omelette and the waiter doesn't know what he's talking about. He describes it and Susan, his accomplice from Florida, says, "He wants a homestyle omelette." It's always just a little off. It sounds familiar but it isn't. Willeford spends as much time describing highways as he does the ever-pervasive humidity. Freddy complains it's like breathing underwater. Florida is a sidestep out of reality, where crime is this ceaseless activity always already happening and the swamp is creeping at your feet, always ready to swallow you whole.
Posted by matthew.