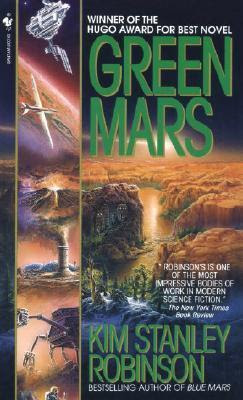 Green Mars won the Hugo for Best Novel in 1994, up against big names like William Gibson, Greg Bear, and David Brin. I haven't read any of the novels nominated that year, but I can't imagine they'd be better than this. I liked Red Mars a lot when I read it back in January (here) but I wasn't prepared for how much better this sequel was going to be.

It's about one hundred years later and the First Hundred, now down to about 40, are in their hundreds and are underground, driven there by the giant corporations fighting for control of Mars as an economic asset. The genetically engineered brood of Hiroko, a prophet and quasi-cult leader, have come of age and they are ready to take back Mars. With the atmosphere warming and the flora growing, the planet is on its way towards habitable, but who will own it and what will they do with it?

Where Red Mars had terraforming on the top of its mind and politics in second place, Green Mars inverts this hierarchy (pun intended) making the realities of revolution its absolute most immediate interest. Like many good leftists, Robinson considers the messy practicalities of revolution, how to best accomplish it, and what amount of bloodshed is acceptable or necessary. Robinson never flinches away from chronicling the ins and outs of revolution.

The endless meetings and arguments and chastising and exhortations inherent to political revolution can feel a bit draining for the reader, but it's just as draining for the characters, something Robinson is at pains to emphasize. Characterization is greatly improved with this second entry, and not entirely because the hard work has already been accomplished in the first book. There is a tremendous amount of new characters introduced, the second and third generations now adult, and a few of them are as textured and nuanced as with the First Hundred carried over from Red Mars. Nirgal and Jackie, two third generation Martians feature prominently, with the entire first section devoted to Nirgal's introduction to the world outside his childhood home and all the alienation and introspection associated with it. Nirgal's initiation into adulthood functions as a mirror for the reader's growing awareness; there is a new status quo for the reader to learn. Not a novel technique, but executed quite well, thanks to the mood and atmosphere on Mars as one of melancholy and regret, a theme simmering throughout the entire novel. The First Hundred must reckon with their failed revolution from the first novel and the planet they've left for the next generations to work upon.

Like this opening section, the rest of Green Mars appears to be the artful solution to an engineering problem. To generalize, the greatest compliment I can pay to this novel is that I could always see the ropes and pulleys and stagehands making the on-stage magic work, and those mechanisms were flawless. Each problem of how to depict something or convey information is handled as cleanly as possible, much to my satisfaction.

The whole novel is one huge engineering problem: how to use the form of the novel, finite, composed of discrete but sequential dramatic scenes, to describe the long, painstakingly slow process of terraforming? Novels and incremental processes happening at the microcosmic level do not generally go together. As well, terraforming happens over centuries, or at least, the plausible kind Robinson wants to depict, and keeping the cast the same over these centuries represents its own subcategory of problem. His solution to this is quite simple: the "gerontological treatment," a DNA-fixing medical procedure giving the characters extended life. That solves that problem. Robinson could have opted for a James Mitchener/Edward Rutherfurd approach, following a family over its generations, but how then to have the cast face their failure at revolution?

Robinson's gerontological treatment doesn't solve the macro problem of form, of course. Terraforming, at least in this series, is slow and small, and novels are big and brash with drama and prose. Robinson must decide from a technical point of view how much detail to include of the actual scientific process itself—and here's the tricky part—in the same timeframe as the arcs of his characters. A sentence or two, a paragraph or two could cover hundreds of years of the terraforming description but that will elide the small incremental changes in the characters. He wants to keep both timeframes as even as possible.

Thus, each scene is its own little engineering problem: how to both advance the characters and the planet's change at the same time? The answer seems to frustrate many readers, going by the Goodreads reviews. It's another simple solution: Robinson opts for travelogues. Scenes of character drama are played out with the landscape as its background. Characters travels for days, weeks to look at some aspect of the planet, and in doing so, this allows Robinson the space to describe the incremental changes taking place upon the biosphere and upon the characters.

The most representative example is that of Sax Russell's section in the middle of the book. Sax was the lead scientist behind the terraforming effort at beginning of the trilogy. It's his "cocktail" of chemicals being released into the world to thicken the composition of the atmosphere. Now, after the failed revolution, he has undergone cosmetic surgery to hide in plain sight, and begins work for one of the many corporations working on terrforming. He's tasked with, brilliantly on Robinson's part, engineering robust flora to withstand the Martian atmosphere and to propagate and build up the biosphere. It is, after all, lichen, grass, and moss that's going to be the next step in the terraforming process. So Sax works on the plant life and takes multiple long trips out into the world to observe the slow colonization of ground by flora. Each trip shows him, and us, the changes wrought upon the world. Meanwhile, his trips also provide a window into the growing restlessness of the populace, how the revolutionary zeal is once again taking hold of the natives. He must reconcile his desire for pure science with the human cost of politics. It's a wonderful performance by Robinson.

Each new section, following one character, expands upon the world, introducing more and more characters and concepts, until the endgame, when revolution is inevitable and the planet is irrevocably changed. Just as in Red Mars, Green Mars ends with a Biblical flood, but this time the atmosphere is warmer, and not everything instantly freezes. This flood is synced with a global catastrophe on Earth, where the Antarctic ice shelf disassembles, causing a worldwide rise in water of at least six meters! Now Terra is devastated, the Red Planet is in disarray, and the corporations are fighting among themselves. The new status quo does not necessarily repeat the failure of revolution from Red Mars, but neither is it a huge success. Rather, it's a prime set up for the precise refinement and establishment of a new political and ecological reality in Blue Mars.

My appreciation for this novel is prismatic: as a leftist, I can't help but admire Robinson's commitment to staging yet another revolution; as a critic (I suppose), I find myself in love with how elegant is the juggling of formal and thematic elements. He really pulls it off here. He really does. Can't wait to read the final volume, after a break of course.