I made it 250 pages into D. H. Lawrence's The Rainbow and I made the painful decision to abandon it. I had stumbled through its lush but thorny bushes for over a week and I had made little progress. Once I came to the halfway point, I realized I was despondent; I still had another 250 pages and a whole other novel to complete the story! With some introspection, I came to understand how closely linked my mental heath is to reading. I'll explain. I found myself feeling down while I avoiding reading The Rainbow. I invented excuses not to read it, such as playing video games or watching television (I'm almost done Season 9 of Curb Your Enthusiasm) but as the days stretched on, I felt more and more grumpy, not just with the media I was consuming but with everything. I could sense myself slipping down into the muck of a depression. So I abandoned it. I looked away and grabbed something I knew would be a fast read and a fun read: Nicola Barker. 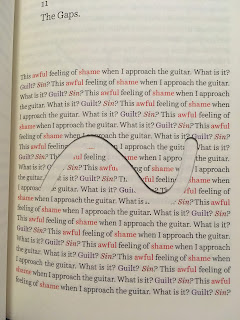 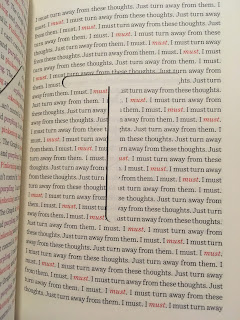 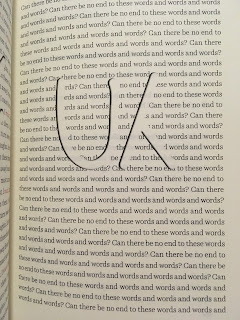 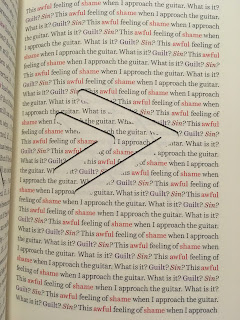 Here are photos of four pages from a sequence around the middle of the book, when the protagonist Mira A has a dream, and strange glyphs invade her mind. How Barker chooses to depict this incursion is clever and aesthetically beautiful. The whole novel isn't like this, thankfully, but there is copious amounts of textual play: font colour shifts, gnarled spiralling text, a cathedral shaped by words on the page, and so on and so forth. Barker takes what is a ho-hum dystopia and livens it up with graphic design and a clever take on music and colonialism. It's also a bit more interior than I'm used to with Barker. Usually her novels are endless fountains of dialogue, words words words, but there is less dialogue here. H(A)PPY is mostly internal monologue with spare conversations. Not a judgement on my part, just an observation.

Hotel Du Lac was Anita Brookner's win for the Booker Prize back in 1984. During my feverish Booker project of a decade ago, I'm not sure why I didn't read this one, as it's short and accessible. I mean, I read Nadine Gordimer's The Conservationist and I don't think I understood a single word! But Brookner's accessibility is illusory, I believe. As an older, wiser reader than 10 years before (and hopefully still improving, all the way to my inevitable, but welcome death!) I can guess I would have disliked this book. Nothing happens, all the action is internal, and the delight of Hotel Du Lac is in the careful observations and interrogation of its cast. I might even step a toe in the waters of accusation to levy the charge that Brookner doesn't seem to like women much. In Hotel Du Lac, Edith Hope, a novelist of modestly successful romances, is sent to a hotel by Lake Geneva for a month of rest and relaxation. There she meets and interacts with a varied cast of rich people. I use the passive voice ("is sent to") because she is shipped off by her friend for a social transgression not revealed to the audience. The short novel is mostly a series of comedic mishaps with these people painted unkindly by Edith and by the narrator. Yes by both.

I thought of Adam Mars-Jones while reading this, and how frightened I am of his critical eye. I read his review of Hadley's Late in the Day in the London Review of Books. In his essay, called "Faithful in the Dark," he has some kind things to say about Hadley's novelistic powers, her elegant turns of phrase, but even with all these compliments, his eye is too incisive to let go of minor quibbles. He writes of Hadley's shifts in perspective:


The lack of definition between points of view is at odds with the way scenes are sometimes cut arbitrarily short, before the characters’ interplay has run its course, something that draws attention to the executive decisions of a writer who, most of the time, would prefer to be undetectable.

This problem is minor, he admits, but the consequences are significant: "when points of view proliferate the psychological space available to the reader is whittled away rather than opened up." I couldn't help but think of this as I read Hotel Du Lac, which for the record, I enjoyed. My reservations though extend to the voice, the perspectives, just as Mars-Jones did with Late in the Day.

I worry there's little space between the narrator and Edith. So little space as to have Edith's crypto-misogynistic beliefs bleed into the narrator's, a reversal of how characters often act as mouthpieces for authors. In the beginning, when I was unfamiliar with Edith or the plot or anything, I was struck by Brookner's strong choices for verbs. On the first page, Edith is described by the narrator as "a writer of romantic fiction under a more thrusting name" (1, my italics), a wonderfully active verb operating as both descriptor and pun. Within a matter of pages, the narrator switches to the letter Edith is writing to David (of whom we know nothing at this point). Other authors might have withheld switching perspectives so immediately after the opening pages, but Brookner doesn't seem shy about it. Right away, Edith's choice of active verbs feel familiar. She describes a bow-legged woman as "throw[ing] herself from side to side in her effort to get ahead" (4). Again, a wonderful turn of phrase, and provides the reader with an indelible image and a clue into the character of Edith herself (her inability to move forward in her own life). But to me, there's a troubling closeness between Edith's perspective and the narrator's. One might call this free indirect discourse, which is a third person perspective dipping in and out of a character's perspective, but that feels generous. With this style, one would expect to feel a narrator distinct from the character. But in this case, some of the verb choices are the same. In one letter to David, Edith describes Mrs. Pusey as "heaving" herself out of a chair. A few dozen pages later, the narrator has Mme de Bonneuil "heaving" herself out of a chair. Is this a failure of imagination on Brookner's part to repeat herself in a novel only 180 pages long? Or is it a purposeful choice to make the narrator as undetectable as possible, a strategy whereby the narrator mimics the protagonist's thoughts? Why then the letters? Why the shift in perspective to third person to first person in the letters? I don't have answers to these questions, but I can confidently judge the psychological space available to the reader, me, as whittled away instead of opened up. It's a curious and unfortunate problem, but not fatal.

There's a great bit near the beginning of the novel when Edith is having lunch her agent. She's asked some innocuous question and she works herself up into a lather getting mad about life, people, romance novels, sex, etc etc etc. She dismisses the sexually liberated woman as a way of living:


'Harold,' said Edith, 'I simply do not know anyone who has a lifestyle. What does it mean?...'

which made me laugh. In other words, I'm definitely going to read more Brookner. By chance, I found two novels by her at the recent charity booksale (which I'll discuss more in a future post).

Red at the Bone was terrific. Part of me wishes this was longer, a family epic in epic length, but a wiser, older part of me recognizes Woodson accomplished everything she set out to do in only ~200 pages. The characters feel alive and textured and frustrating the way real people do all thanks to Woodson's astonishing dexterity and efficiency. However, the brevity does have its costs; the novel feels a smidge slight in the endgame, especially in its gestures towards 9/11 which has the unfortunate side effect of feeling like a twist ending. Still, a great read.

Green Mars I will talk about in depth in its own forthcoming post. For now, I liked it more than Red Mars.
Posted by matthew.