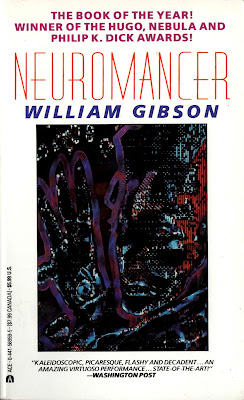 Part of me thinks I read Neuromancer in high school. I certainly owned a bunch of his paperbacks, but I don't think I finished the debut novel. I know I sold them all, because they all had uniformly hideous covers. I don't think there has been a modern cover design for Gibson that hasn't made me retch. But as I slipped through Neuromancer, I grew steadily sure I had never read a single word of this beyond the famous opening line. Most of the concepts introduced therein were already familiar to me, and how could they not, thanks to my steady diet of science fiction over the decades. What struck me with Neuromancer, beyond its surprisingly staid quest narrative, is Gibson's confident mature style. Obviously a careful writer, Gibson's sentences are glittering, shiny gems. I loved the experience of reading this, sentence by sentence, even when the plot was a bit meh. AIs and orbital palaces for the uber-rich? Not as radical as I expected from this. 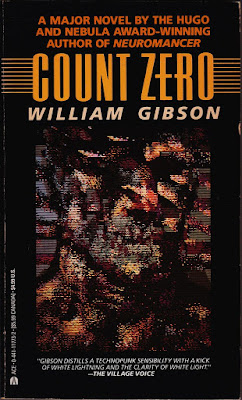 Count Zero, though, was an improvement for me, as least in terms of plotting. The three threads of the narrative, which obviously converge in the finale, were each more alluring than Case and Molly's bouncing around from incident to incident. Each plot movement in Count Zero felt logical, a case of "and therefore" instead of "and then." The writing is as sleek and shiny as any chrome Gibson describes, but perhaps more forgiving, with more helpful exposition.

However, I read a negative review of Count Zero, which is not a minority opinion (it appears to be rated much lower than its older sibling), and I've been haunted by it ever since. The user named nostalgebraist (a clever nod to Iain M. Banks?) gave a measly single star to Count Zero. He concludes his review: "One star is too harsh a rating for a competent if totally unremarkable genre story, but Gibson pretends to do so much more, and that's frustrating" (here). The reviewer's main problem, the one that I said is haunting me, is that Gibson's vision of the future is as superficially constructed as any fantasy worldbuilding. He writes:


Overall there is a complete sense that Gibson's choices of scenery have no consequences whatsoever. It makes no difference whether something is a "god" or an "AI," whether a character is "jacking into the matrix" as opposed to "casting a spell to enter the dreamtime." It makes no difference that Gibson has chosen a futuristic "look" for his noir story, because in the end it's just a noir story.

In other words, the aesthetic chosen for the story are as arbitrary as the technology Gibson is intent on writing about. A damning indictment if true. Science fiction, some have argued, should set itself apart from realism (as fictionally constructed as any other genre) by its use of the novum, the central metaphor, usually technology. The core idea should say something about the present day material conditions under which the writer is working, what elements of society or humanity they hope to critique to observe, using that very metaphor as the crux. Obviously this isn't an inviolable maxim; science fiction using the future as its background isn't a crime against the genre. The problem is that these metaphors, such as "spaceship" or "cyberspace" are no longer metaphors but tropes. They've lost their sharpness through repetition and endless waves of production (in the form of shitty commercial fiction like the works of James S. A. Corey). Does Gibson's fiction fall under that category?

I don't have a definite answer to this. It's an ambiguous situation. On one hand, we have nostalgebraist's perceptive observation that "[c]omputer hacking is described so impressionistically that it bears no connection to real-world computing," the opposite problem plaguing post-cyberpunk such as Melissa Scott's Trouble and her Friends (here), which features long slogs of "endless paragraphs with details of hackers typing, plugging and unplugging cords, carrying around equipment, and countless mentions of seemingly 'technical' words such as 'routines, 'programs,' and other cool new terms" (from my own review). Gibson isn't interested in that at all. The decks the hackers use are rarely described other than to give the impression there's a keyboard involved. I'm unsure of the physical dimensions of the decks; they could be the size of an 80s Casio electronic piano for all the help Gibson provides. As for the hacking itself, Gibson gives us beautiful descriptions of "cowboys," as he calls them, literally flying through cyberspace, looking at beautiful neon patterns. It's definitely not grounded in reality. It could be anything.

But, we can't dismiss Gibson's contribution to the corpus of science fiction. He popularized our very conceptualization of cyberspace and coined the term itself. He might not have predicted every single aspect of the future, but his concepts are the very fabric of futurity. nostalgebraist is being disingenuous when arguing there is little difference between a "god" and an "AI" in Count Zero because it's of the utmost phenomenological importance to the plot. The AIs of this world have subtly rearranged the political conditions and have explicitly changed how humans interact with the shared delusion of cyberspace. The corporations of this future fight among themselves for dominance while Howard Hughes-like hoarders of wealth look to even exploit the AIs for immortality. One should not divorce the novum of Count Zero from the political of its own plot. More so here than in Neuromancer does politics affect the aesthetics which in turn affect the novum and so on in a cycle of science fiction writing. Perhaps gods do interfere in the economies of fantasy worlds, but to commune with them, warriors and knights and barbarians don't physically connect with machines. It's the root of Scott Bukatman's terminal identity theory: “an unmistakably doubled articulation in which we find both the end of the subject and a new subjectivity constructed at the computer station or television screen” (Terminal Identity 9). The magic rituals and conversations with gods in fantasy fiction aren't usually conducted with a machine that literally constructs new selves. Perhaps they are and I just haven't read it yet. I'm merely trying to suggest dismissing Count Zero's futurity as simple "computer-themed wallpaper" as nostalgebraist isn't productive. While the reviewer makes some incredibly helpful observations such as the resistors braided into hair, his overall point misses the mark.

I really should have done my PhD on cyberpunk. It's the genre that ignites my imagination and sparks some of my better writing.
Posted by matthew.