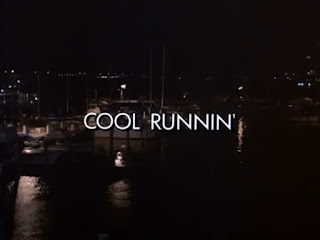 "Cool Runnin'" is yet another study of Sonny Crockett, leaving Tubbs to be even less of a supporting cast member than usual. Crockett is provided with two major events for character development: the deaths of fellow cops (who were with him at the academy) and his impending divorce from Caroline Crockett (with whom he has a son). The divorce stuff is kind of interesting, if only because we see a little bit more of Crockett outside of his "by-any-means-necessary cop" type. The deaths of his friends are somewhat gratuitous in terms of motivation, but the show has to keep things dramatic, after all. This isn't realism; this is prime time TV.

Notably, the episode features a fantastic exterior establishing shot of the Wyndham Grand Bay Hotel in Coconut Grove. The hotel has this remarkable staircase design with each floor being its own step. Here's a rather gross Google Earth image of the hotel. 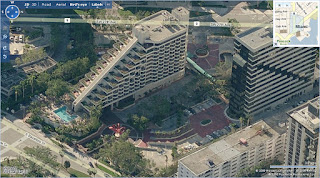 The best info I can find of it is that the hotel was demolished in 2012, after being open for only 30 years. It was built in 1982 and was, for a time, a five star hotel (by whatever standard is accepted by the hotel industry). A general decline unfolded as other more luxurious hotels opened in the area and investors/creditors began braying for blood. The hotel was about to enjoy renovations and updating when the 2008 recession hit. A development group bought it for a measly $24 million and are currently building twin residential towers where this hotel once brightened up the bay. 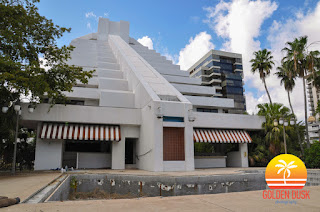 A fascinating and somewhat sad exterior for the show. Watching this show 30 plus years after its airing means we're often looking at the ghosts of the past, either the actors have passed away or the setting itself has mutated, leaving behind its character for a different one. I won't mourn, per se, the death of a hotel owned by millionaires who catered to other millionaires, but I will see the Wyndham as emblematic of the way cities have changed dramatically since 1984. Or perhaps, the insidious inexorable march of gentrification.

The notable supporting character in this episode is a motormouth named Noogie, who was surely devised and cast as an Eddie Murphy-type character. The climactic scene of the episode occurs at Noogie's room at the Clay Hotel. That Noogie, a low level crook who gets by on hustles, lives there implies that the Clay Hotel is somewhat seedy. Gunfights don't happen at the Wyndham, after all. But a cursory check of the internet shows that the Clay Hotel has since been gentrified too! 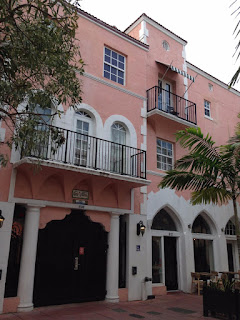 This is a recent photo; the hotel in "Cool Runnin'" is a bit more brown and dingy. The Clay Hotel does give us another indication of the great diversity of architectural styles in Miami. We see the Spanish villa influence, perhaps an effort to create a sense of hominess for Latinx visitors, but more likely a calculated move to delude white tourists into believing Miami is more exotic than their bland, drab, Midwestern home state.

"Cool Runnin'" also offers the distinct pleasure of crowd shots. By virtue of filming on location and outdoors, the show provides copious glimpses of people long changed or gone, dressed in 80s fashion, going about their normal day until they saw a film crew and Don Johnson and found themselves extras in a scene. The director of this episode, Lee H. Katzin, uses multiple montage sequences of regular Miami people: walking the streets, dancing in "Jamaicatown," shopping in outdoor markets, playing dominoes. It's textural and it's one of my favourite things that film can do. I always think of the opening sequence to Dog Day Afternoon, with its Elton John song and seemingly limitless glimpses of these people and their regular lives. I thought, for a moment, I might start editing together a film essay of the crowds from Miami Vice. That might be neat. I love these montages because they create atmosphere almost immediately and create verisimilitude.

A fine episode, nothing particularly amazing, but as always, I take my pleasures where I can get them.
Posted by matthew.