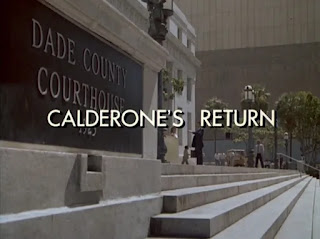 Title: "The Hit List" or "Calderone's Return Part 1"
Airdate: October 19, 1984
Notable Guest Star: Jim Zubiena, I guess, who was in a few other Michael Mann movies
Notable Song: quite a few options but "In the Night" by Russ Ballard
Only 4 episodes into its run and the show goes back to the well of its original villain. Luckily, Calderone himself is a background figure, with Zubiena's Donald Sutherland-alike hitman taking centre stage as a Michael Myers kind of figure of myth and death. We're told a lot about this hitman and we're also treated to an extremely Michael Mann-style action sequence where the hitman uses a huge fucking shotgun to murder a drug dealer. When confronted with a cop, the hitman uses what is called the Mozambique Drill: two shots to the body, one to the head. The same kind of precision and ruthlessness marks later Mann villains like Tom Cruise in Collateral.
Speaking of Michael Mann theatrics, we have three big songs to choose as "notable" for this episode: the Pointer Sisters' "I'm So Excited" and ZZ Top's "Tush" both play in the nightclub where the Vice squad have set up a sting for who they think is the hitman. "I'm So Excited" plays over this tremendous montage of the lighting rigs in the club, like a glimpse into the inner workings of a factory. It's an extremely atypical sequence of shots, especially of a club, where normally one would select shots of young people dancing. "Tush" plays during the second half, when a fight breaks out, causing chaos for our heroes. I can't really imagine ZZ Top playing in a danceclub, but I guess I can't complain; I wasn't even born when this episode originally aired (though my mom was extremely pregnant with me at the time).
The song I chose as notable was previously unknown to me. Russ Ballard seems to me more famous for writing songs for other folks than for his own hits, but his 1984 solo album gave us two songs for this show—one in this episode and another in the next episode. I joked at the beginning that the show quickly went back to the well but it's the truth. The song "In the Night" plays as Tubbs races across Miami in the dark to save Crockett from the hitman he doesn't know about. Lots of neat shots of the neon lights and blue hues of nighttime Miami as the Bronco zips through the streets to the soundtrack of pounding synthesized drums, but frankly, it's a rehash of the seminal and iconic sequence from "My Brother's Keeper" when Phil Collins plays as Crockett and Tubbs make their way to the climatic showdown. I'm not complaining. I watch this show for this exact reason. It's about style and atmosphere.
And architecture, I suppose. This episode gives us a thrilling look at the Atlantis Building, where the hitman kills the dealer at the beginning of the episode. It's notable for being part of the opening credits to the show but also for its distinctive 5-storey plam court, cut out of the building, which its distinctive red spiral staircase. 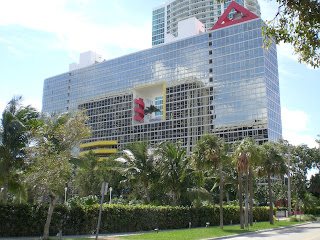 As far as I can tell, the building was built in 1982 by the firm Arquitectonica. Before the building was finished, the design won an architectural award, judged partly by Frank Gehry of all people. There's lots of neat pictures of the building at the firm's website (here). Looking at other projects by Arquitectonica on their website, I won't be surprised to see other buildings appear on Miami Vice in future episodes. Although, some of the buildings look like the kind of postmodern architecture that Fredric Jameson so famously hated. I can't find my copy of his book, but Jameson talks about the Bonaventure Hotel in Los Angeles as this glass facade and its interior being an entire mini-city, with escalators and elevators taking the place of human motion. This giant glass obelisks and canyon walls let nothing in and nothing out; they're complete ecosystems.
The building was somewhat anomalous for its rectangular shape and thinness. While other buildings in the Miami skyline nowadays are glass phalluses reaching skyward, the Atlantis separated itself from its peers by being only 37 feet wide. Apartments span the length of this, with the side facing the bay being rounded, to allow for living rooms to enjoy a 360 degree view. Interestingly, it's perpendicular to the bay, as opposed to facing it, as most other buildings did and still do.
With its glass face and Bauhaus pop of primary colour, and its featuring in the show, the Atlantis made sense as a location where a drug dealer would enjoy the spoils of his trade. In the opening sequence, the Vice members have him under surveillance, watching him and his girlfriend and his bodyguard as they discuss buying new clothes or buying a new car. Very era specific here. The Atlantis isn't just a location here, but a signifier for wealth and prosperity. It's not a mistake that the building also appears in Brian De Palma's Scarface. The building still exists, by the way. It's condos now and probably more expensive per month than I'd make in a year. But that's yet another reason why I watch this show: the excesses of the 1980s.
Posted by matthew.