I won't lie. The only reason I looked at this book was because of the book design: three volumes in a slipcase. But when I found out what was the book's subject, I became very interested. Also, it was longlisted for the Booker Prize. Let's take a look. 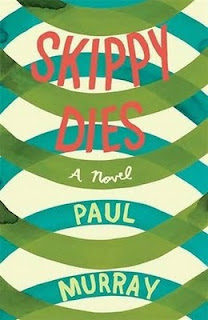 Skippy Dies is set in Seabrook, a prestigious and expensive boarding school in Ireland. The story follows a group of friends in their second year, Skippy and Ruprecht mostly, as they navigate the murky waters of adolescence, girls, history, M-Theory, and Robert Graves. There's also Howard, a former student, now history teacher who is stuck on auto-pilot, until a beautiful substitute teacher arrives and messes up his life.

One thing that always pulls me out of a book is a jarring unrealistic character voice. This happens all the time with American TV shows, where 20 year old men are writing scripts starring teenage girls. It's extremely difficult to pull that off, so it's especially impressive when Paul Murray seems to "get" all the voices in this book.

He absolutely nails the modern teenager, with their never-ending stream of sarcasm and irony, obsession over sex, and their ever-present awkwardness. The boys are so cynical, or at least, present a cynical facade, so it's all the more heartbreaking and authentic when Murray shows the boys as... well, boys.

While at its surface, Skippy Dies is a 660 page boarding school comedy, there also exists darker things below. Murray doesn't turn away from more adult themes such as death and the First World War, especially when Howard, the depressed and stuck history teacher, discovers the memoir of Robert Graves.

In this giant book, Murray mixes into the big pot: Graves' The White Goddess, string theory, time travel, Irish history, and a whole bunch of Edwardian poets. But at no point is it ever boring. Murray skips around the cast with a deft hand, leaving us always wanting more.

I was reminded a lot of reading big American novels, modern ones I mean, where authors such as Franzen and his legion of imitators, try to cram everything they can, including misunderstood science to give a newer sense of imagery and counterpoint. Murray tends to write in that expansive showy way that Franzen et al. write in and it tends to work most of the time.

What doesn't work in Skippy Dies is that there's just a little bit too much to be had here. Not that I was ever bored, but I felt a bit of a trim may not have been a bad thing, especially in the last third of the book. Once Skippy has died, Ruprecht goes on a quest which uses dodgey Victorian science and music. It's clever how Murray ties a lot of the themes together in the big climactic memorial concert, but that doesn't mean it isn't a little tedious to get to the point.

Other than the last third needing an edit, I thought Skippy Dies was fantastic. It's alternatively hilarious and heartbreaking, and it always feels very authentic, even when Murray writing in the voice of teenagers, a notoriously hard group to pin down. While it may be a big novel, on a grand scale, Murray keeps it consistently great with a well drawn cast and a deft ear for dialogue. Very good!
Posted by matthew.