It's taken me a long time to wash the foul taste of Babel Tower out of my mouth. I really didn't like it. And then when I tried reading A Whistling Woman, the final novel of Byatt's quartet, I was put off by the same problems immediately. It's taken me months, but I finally fucking finished this book. 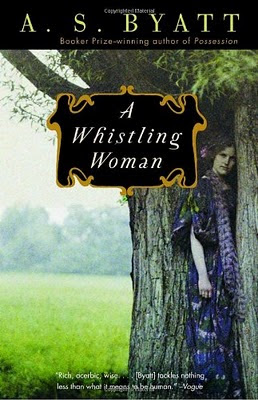 In 1968, Frederica has become the host of a talk show on the exploding medium of television. At the big university, students are uprising and creating their own anti-university. The Ottokar twins have got involved with a cult leader, who has already captured Ruth.

That's about it for plot with this book, and it is unbelievably tedious to read it. Instead of a well-written novel about the English family and the English intellectual, Byatt has opted for a novel of ideas rather than a conventional book. It's just idea after idea after idea, thrown at the reader, as if the author's hoping something, anything will stick and make the book seem clever.

Byatt's favourite thing in the world appears to be contextual references and Frankenstein patchworks of novels already written. We saw this before with the first three books, but now, Byatt goes out of her way to point it out to the reader: Frederica's annoying cut-up book Laminations gets published and the critics misunderstand it but lavish praise on it. That's so irritating, Byatt.

Instead of tying loose ends, or even developing further her large cast, Byatt decides to introduce a bunch of new people and have them talk at each other about philosophy and math. This is in addition to copious scenes of established cast members talking at each other about math and fucking snails.

There isn't an idea or concept that Byatt can't tie to her grandiose theme of the inadequacy of language and the inadequacy of humanity. Every single goddamn Sixties revolutionary idea is thrown in the blender and mashed with everything else.

It's interesting at first, but becomes absolute work by the halfway point of the novel. If only there was some sort of counterpoint, some plot development that saved the rest of the novel. Well, no there isn't. In fact, there's an even more boring and irritating subplot, that of the messianic cult figure, whose back story is told in painfully detailed fashion, as if anybody gave a shit about him.

I can't believe how much I hated this novel. When I started it, I thought Byatt would do something with the concept of endings and how real life isn't like that, or something. Hell, anything! But instead, we're treated to endless fucking pages of snails, hippies having group sex, stupid flashbacks to a moron, and more tedious imagery.

A Whistling Woman might one of the worst books I've ever read. Not because of Byatt's usual crisp prose, or her ability to connect disparate dots, but for this novel's sheer pretension and self-indulgence, and it's totally without merit. It doesn't amount to any grand idea about England's intellectual revolution. In fact, the conclusion I came to upon finishing this book is that hippies are fucking annoying, and the four hundred pages to get there are boring.

Irritating and annoying are the two best adjectives to describe A Whistling Woman. I can hardly believe this was written by the same author as the first two books in the series. At least, those books aren't affected by this frustrating exercise in testing a reader's patience. I'm done with Byatt for a long time.
Posted by matthew.