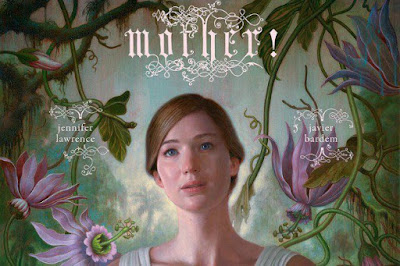 mother! has two major problems going for it: the allegory isn't subtle in the slightest; the allegory is open ended enough to bear the weight of practically any interpretation. This is not a paradoxical claim. Aronofsky's story, that of a cruel creator subordinating a feminine figure to the point of abuse, is a mash up of multiple well known stories from the Bible. The film is even divvied up into two major sequences: the arrival of annoying houseguests in the first part, then the escalation of an absurd amount of houseguests in the second part—mirroring the two testaments of the Bible, of course. Jennifer Lawrence's titular mother figure represents, all at once, Eve, Lilith, Mother Nature, Mary, and a host of other maternal archetypes while Javier Bardem's poet can be considered the Abrahamic God or any creator who gives himself up at the expense of his loved ones. None of this is astute or perceptive analysis of the allegory because the allegory doesn't need any investigation. It announces itself loudly, almost to the point where one expects Darren himself, clad in his trademark scarf and pervert mustache, to face the camera and explain "THIS IS ALLEGORY." But when the allegory gapes open so wide as to allow anything and everything, the technique loses any forcefulness.

Which is a shame as the first half is an exquisite endurance of tension and anxiety. Lawrence is plagued by a well meaning but clueless husband and a gathering of intrusive and nosy houseguests who overstay their welcome within minutes. Later, during an extended gathering, Lawrence is forced into the role of hectoring harpy, padding barefoot around the partygoers, admonishing them for disobeying what little rules she has set out for her home. People continue to seat themselves on a non-load-bearing sink, much to her mounting exasperation. The level of inconvenience and intolerable behaviour from these guests reaches a level of hilarity verging on absurdity. I was encouraged when other audience members seeing the film with me laughed at the same bits, though I'm skeptical Aronofsky meant for his allegorical houseguests to elicit such a reaction. He probably meant for them to be frustrating and menacing in a vague way, but really, most of the first half climaxes into the tonal landscape of a sitcom. I couldn't help but laugh.

Unfortunately, mother! doesn't maintain the dark humour. Instead, the last third of the film is an extended tableau symbolizing Homo homini lupus: violence, destruction, rape all depicted in short sequences with the camera tucked in close to Lawrence's face as she bears witness to all the awful things human beings do to each other. At first, these vignettes are gripping and startling but the film can't sustain this—eventually these bursts of violence become numbing and altogether ineffective.

It ends, now infamously, with Bardem offering the unruly mob his only son, and in a moment of hollow horror, the kind of flinching from the real stuff of horror, the film shows the mob munching on the already killed and divvied up baby. It's a moment of filmic cowardice, the kind evinced so perfectly by Eli Roth's weak and frightened film The Green Inferno. Like a posturing pubescent, these films pretend to be powerful and scary but can't commit themselves to true terror, the true existential dread which characterizes the best horror films.

After this moment of allegorical cannibalism, the mob turns on Lawrence, beating her and ripping at her clothes. This is probably the hardest moment for any audience member, including myself. Even remembering this moment is making me anxious. Throughout the film, there has been a quiet threat of sexual violence against Lawrence, culminating in a quasi-violent act of lovemaking which produces their only child. In one particular scene, Lawrence is asked by an anonymous party guest to go "for a walk." She refuses and when rebuffed, the man turns nasty. Just as with this man, the mob turns on Lawrence. The violence is subtly flavoured with her sexualization and it's godawful.

I can't compute why male filmmakers are so quick to depict the beating of women under the guise of feminism. It's abhorrent. I'm sick to death of watching women get beat to shit by men just for "entertainment" or—even worse—meaning, no matter how illusory or shallow the depth.

Perhaps this is the year we, collectively, have had enough of Film Culture's toxic relationship with women. With Devin Faraci, Harry Knowles, and the other headscratchingly obtuse things the Alamo Drafthouse has done in the past year, maybe we're all at a point of frustration heated enough for change to happen. Because nonsense like mother! doesn't happen in a vacuum. The same well-meaning but ultimately dangerous attitude which brought us this garbage movie is the same entitlement plaguing the film industry and all its satellite discourses such as criticism. Nice Guys like Bardem who ooze sexual danger and this film which smuggle a desire to beat women via "deep" allegory feed into the toxicity of the critics who feel they can get away with threatening women with sexual violence or turning violent when rebuffed. For years, for decades, powerful men in powerful positions use their power to cover the asses of their friends, at the expense of women in the industry. mother! might gesture towards this but the execution is so flawed as to backfire horribly, violently, hyperbolically.

None of the positives of the film (its stellar sound design, its mounting claustrophobia and anxiety) can outweigh the damage the film has done and, more importantly, represents as the worst kind of Mediocre White Man movie.

Fuck this movie.
Posted by matthew. No comments:

I didn't like Provenance and that's a great disappointment to me, considering how much I adore her first novel. I'm not sure what went wrong here: Leckie's increasing interest in social etiquette; the lack of central forward momentum; the myopic interest in the upper class and the plot hinging on replicating their power and status—all of these things could have been the problem or worked together to form a gate barring me from enjoying the novel. At around the halfway point, I was already fed up with the fumblings by the characters for more status, more power. While in books 2 and 3 of her Ancillary trilogy, the interest in social niceties was part of the overall texture and not the prime focus, in Provenance, it feels I'm reading a cultural anthropology textbook of a future. Which might be a delicious meal for some, but it never nourished me.

The two Hutchinson novels were stupendous. He has risen from being an author I'm interested in to an author I will follow very closely.

While I liked the first Black Company book, nothing prepared me for how much a forward leap in quality the second book was. Shadows Linger was as close to a masterpiece of fantasy fiction as I've ever read, not just in the worldbuilding and general narrative, but in the execution of all the technical stuff, such as the dual plotlines, the meting out of exposition, the careful accumulation of plot tangles for the series, the Weird aspects (a castle made of bodies, growing with each body added to the stack, etc). It's all fantastic.

All in all a good month. I also started a couple things, abandoned two things, and have yet to post my August Reads Part Two. When I get the energy to write again, I'll post it.
Posted by matthew. No comments: